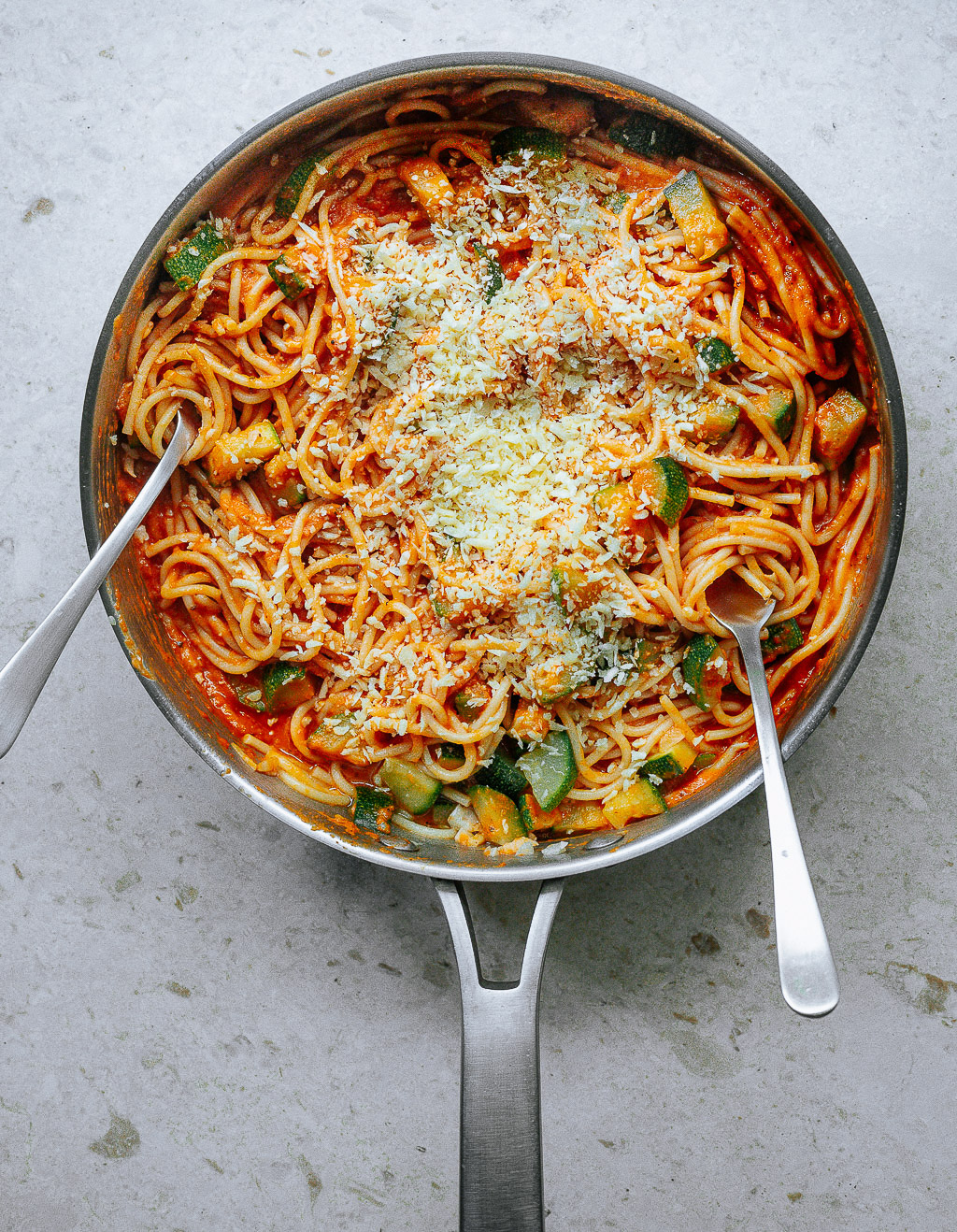 This is unlike any pasta sauce you may have made before. For starters, there’s no pan involved for the sauce itself; you will of course be cooking your pasta in a pan (yet to come up with a nifty trick to dispense with that step, but we’ll get there). Hate to sound like a broken record, but using the oven and not doing this on the stove-top means that you can bung it in and forget about it for an hour. Now who wouldn’t want that.

I’ve been making a variation of this sauce for years now, but never having done the entirety of the cooking in the oven. And sure, I would add roasted peppers and even pumpkin sometimes to the mix, but never a medley of vegetables like I have here. I’ve always been skeptical about going down that route thinking the vegetables would make the sauce bland and stodgy – like a thick, puréed soup. Wasn’t willing to compromise on flavour at the expense of making it healthier. 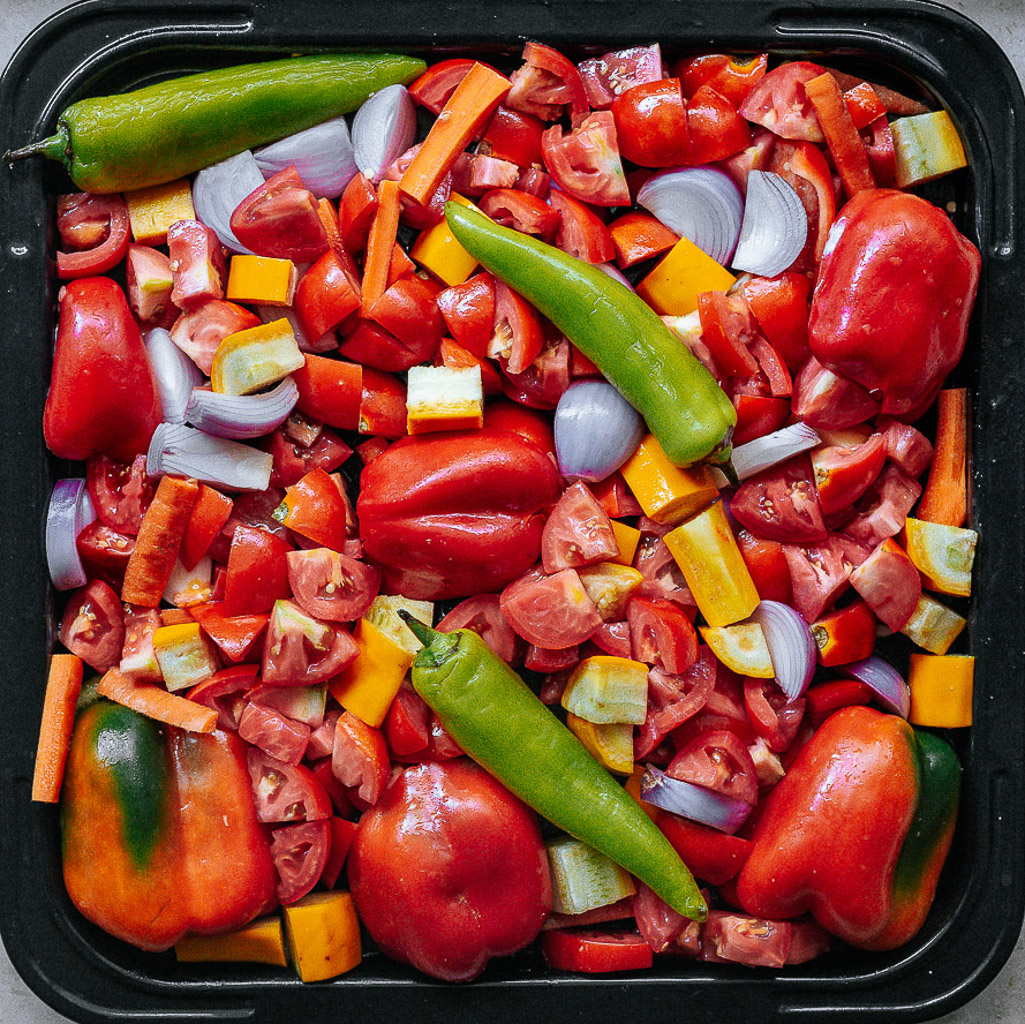 There’s a lot of tomatoes here and for good reason. Tomatoes give the sauce that desirable tangy flavour without which we’d slip back into stodgy soup territory. The peppers—red peppers and banana peppers—get charred and blistered in the oven, contributing to both sweetness and smokiness in the sauce. Roasted banana peppers also provide ample heat without the need for black pepper or chilli flakes. You don’t taste the carrot and zucchini in the end product at all. Like zero. Which is a good thing here if you ask me. They add bulk and nutrition but otherwise you won’t even know they’re there. Like how I’ve heard people describe sweet potato brownies (I personally don’t see the point of these, but you catch my drift). 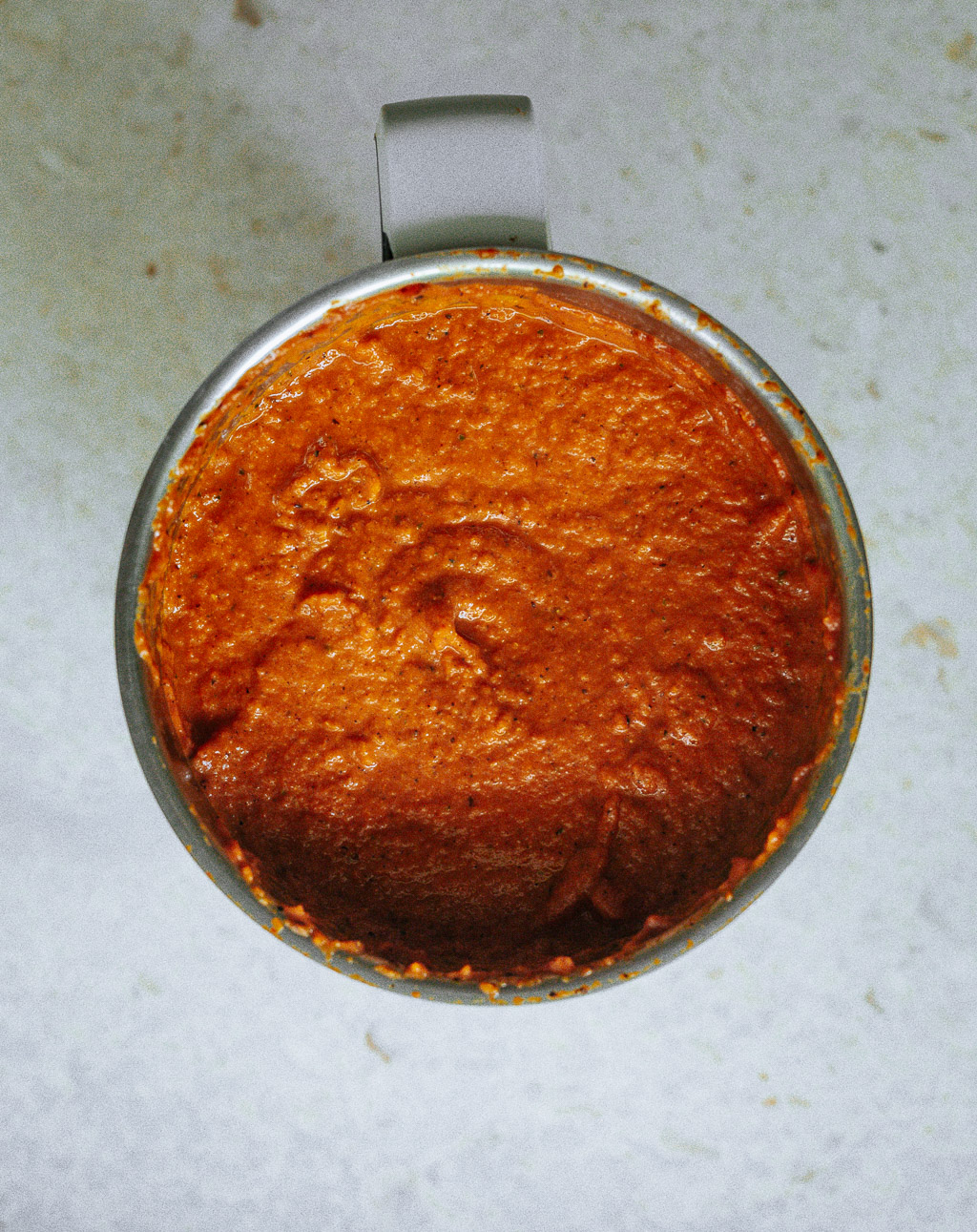 It’s the little things that I chance upon that get me really excited. Like for instance, in this recipe, a whole head of unpeeled garlic goes onto the tray to bake. Since the vegetables are hardy and could use that direct 200 C heat, there’s a good chance the garlic cloves would burn. So I stick the individual cloves under the mounds of peppers where they steam and roast in their little igloos. Cuuute and also gets the job done.

If you have access to fresh basil leaves, definitely throw a handful in at the end. If not, a dollop of pesto would also do the trick. Worcestershire sauce, albeit an uncommon addition, adds depth to the sauce. If you have an oven big enough to roast two trays of vegetables in, I would highly recommend doing this. This quantity makes 4-5 cups’ worth and freezes really well. Tossed through with pasta/layered in a lasagne, served as a side-sauce with meats, used as a dip – it’s incredibly versatile and you’ll be glad to have some extra in the fridge. 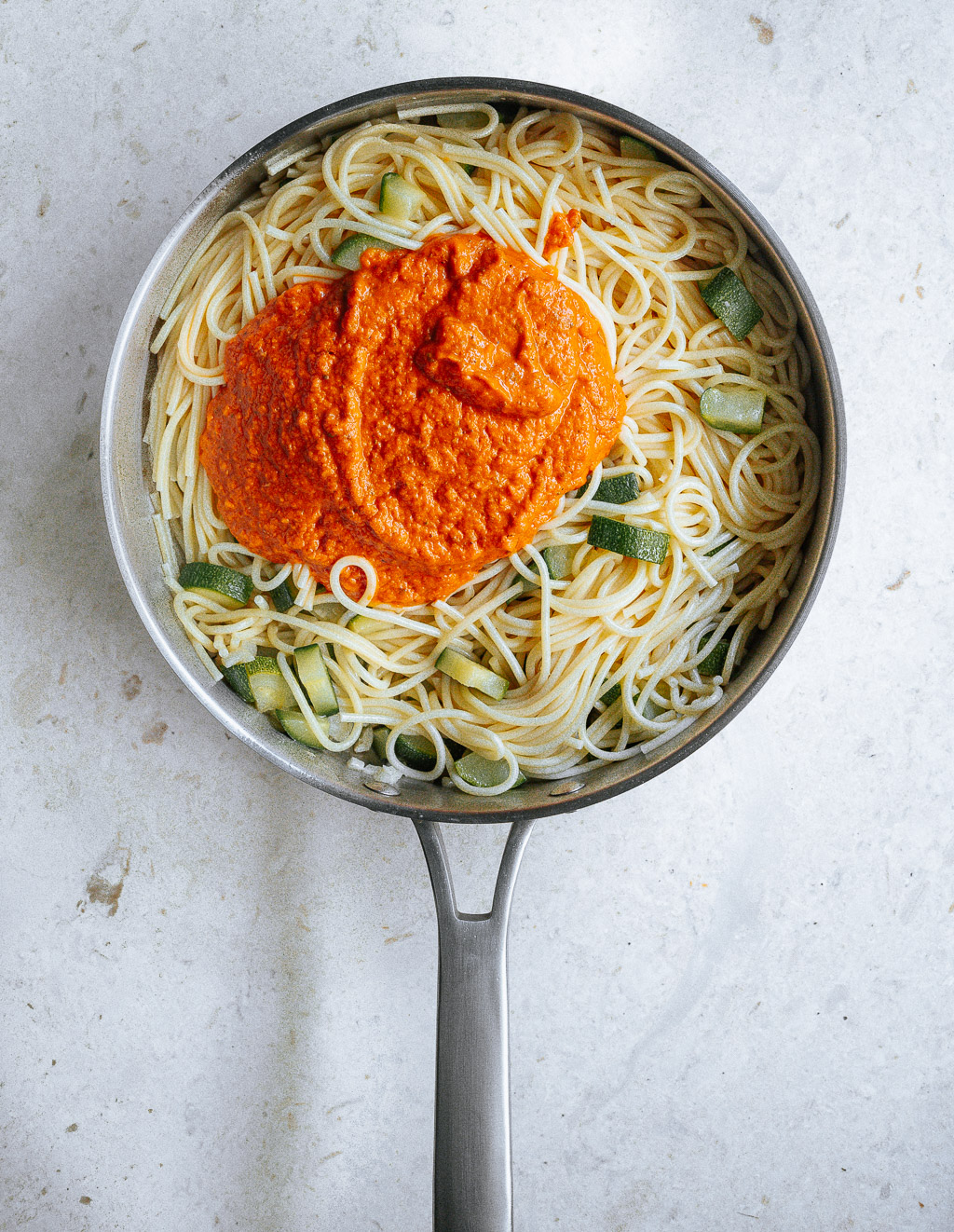 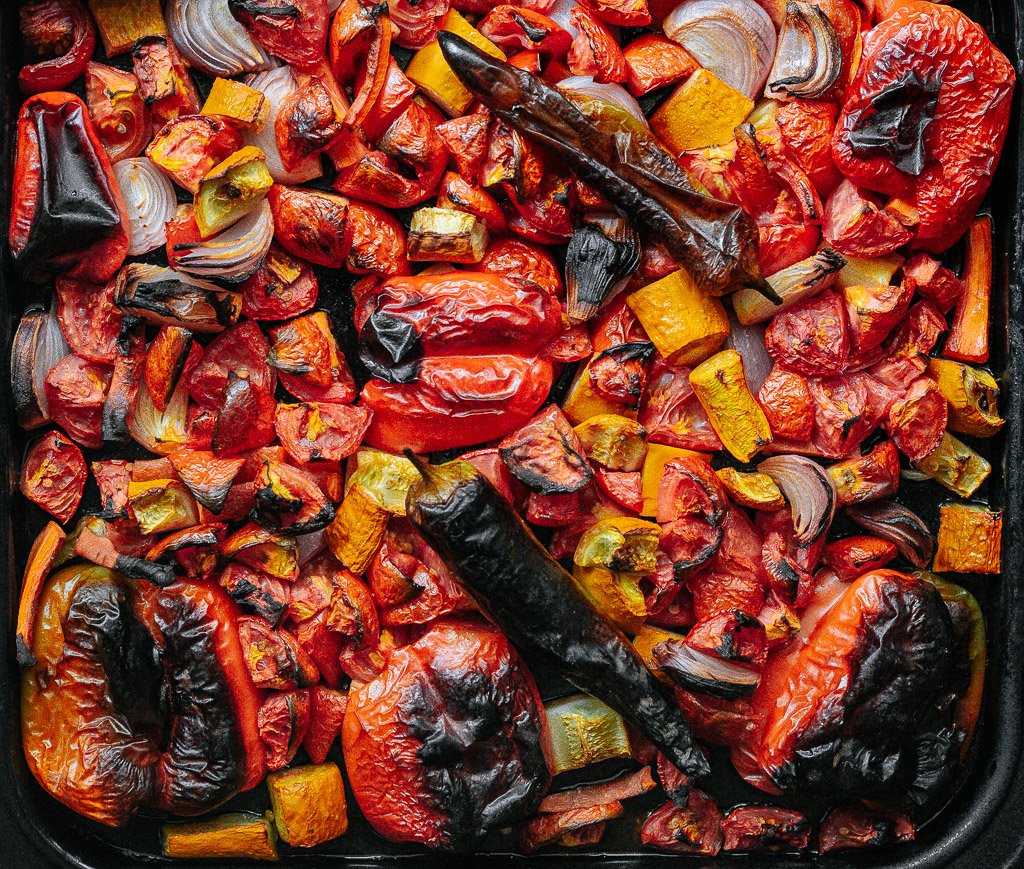 Makes 4-5 cups. Make sure you don't overlap the vegetables whilst roasting. This will cause them to braise and you won't get any colour on them. If you don't have a big enough tray/oven, do this in smaller batches. Freezing tip: Freeze in individual portions so you can thaw only the amount you need. Once thawed, don't re-freeze.
TAGS: Italian,Pasta,Peppers