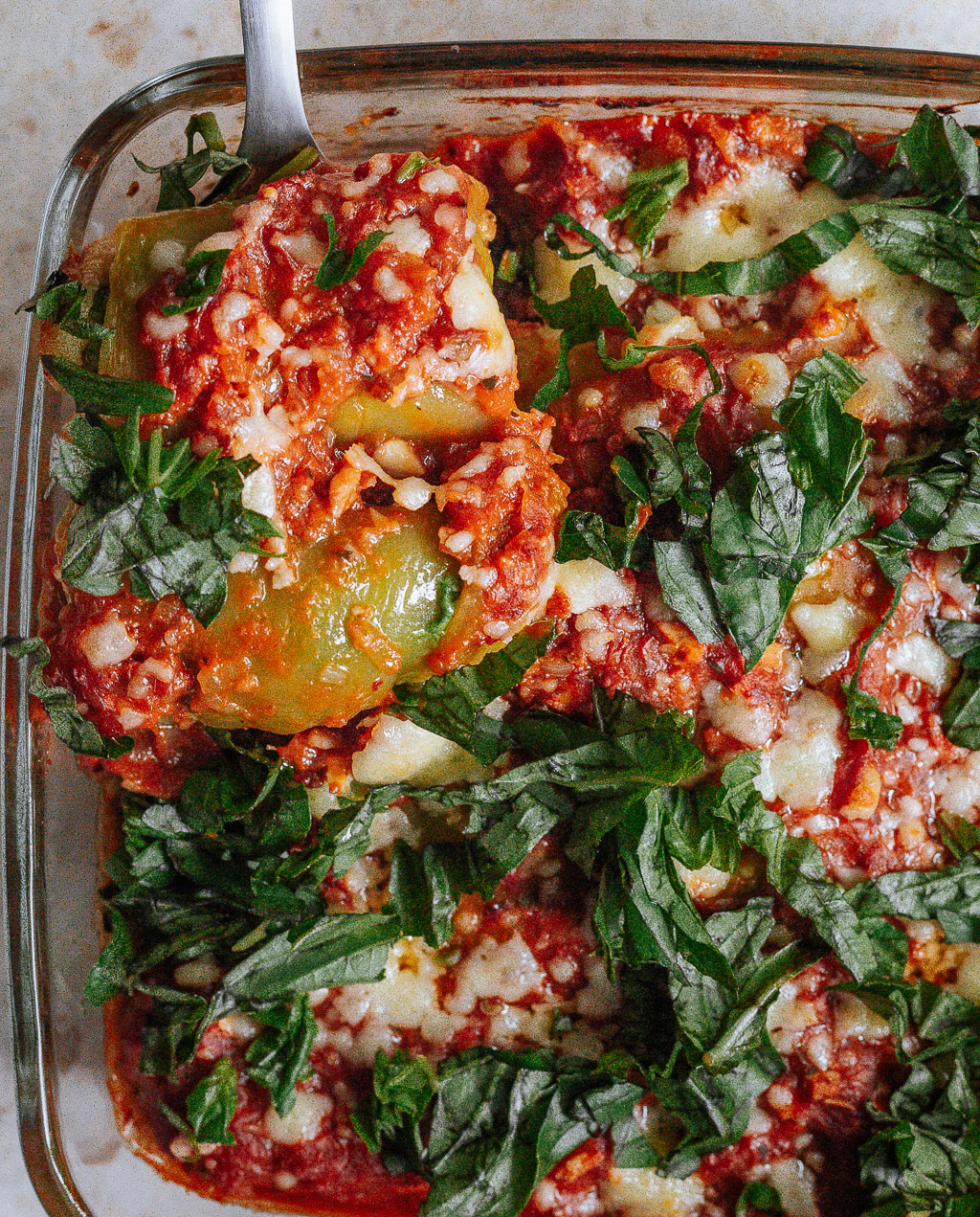 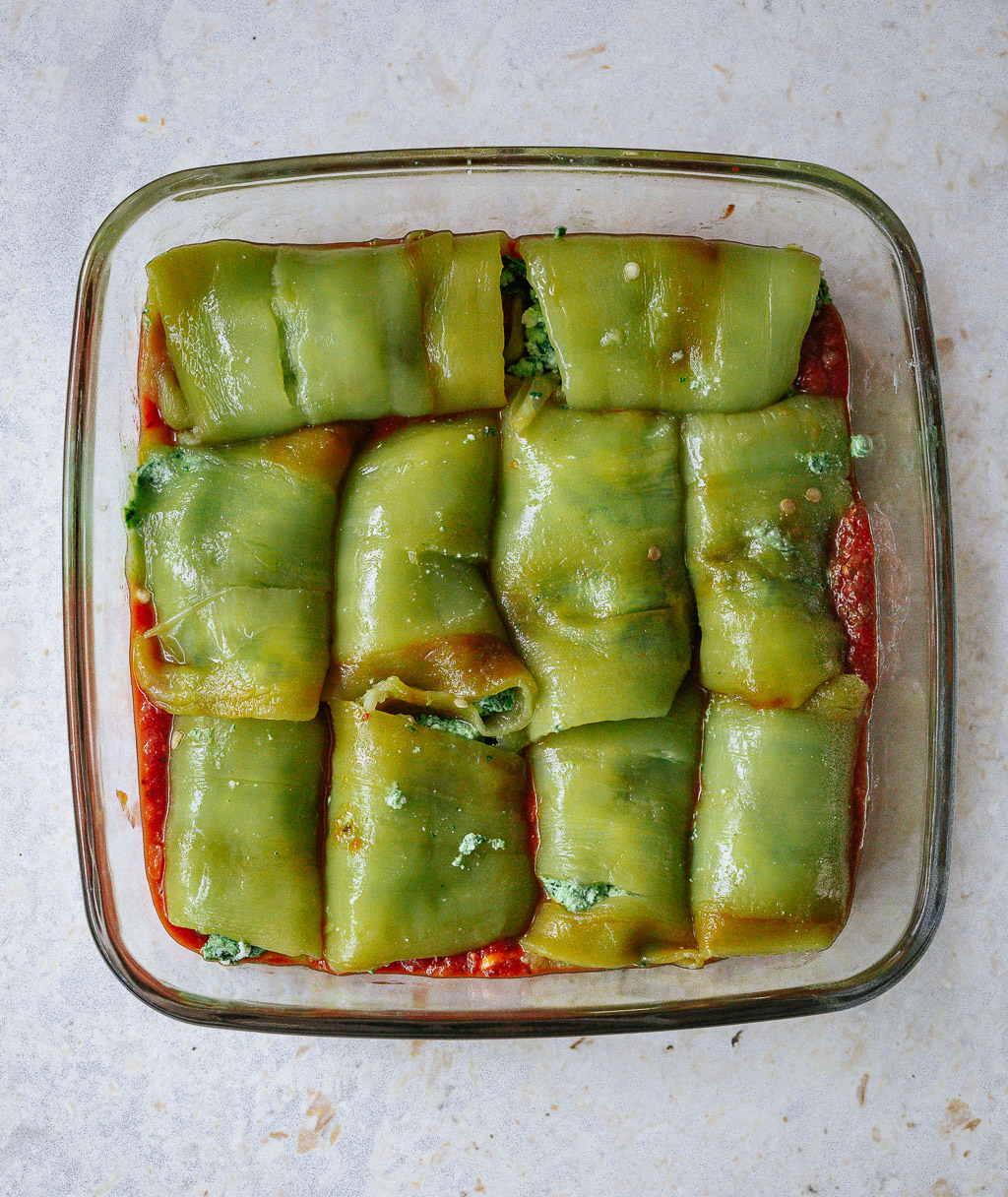 The main idea and concept for this dish comes from my aunt. It’s her adaptation of the Mexican classic – Chile Rellenos. In typical Rellenos fashion, her version uses only cheese in the filling (no spinach). After stuffing the peppers, she batter-fries them in an egg white-flour mixture before dousing in tomato sauce. Traditionally they’d use poblano peppers, but she found the locally available banana peppers to work as a great substitute – they are spicier than regular peppers as well as hold their shape upon cooking. I can’t remember when I adapted this recipe and started adding spinach to the filling. And I don’t ever recall frying them. (There is another version of this on my blog using a slightly different method. That is very good too, but I mostly follow this now.)

Banana peppers/bajji molagas are hotter than bell peppers. They have the flavour and crunch of a bell pepper and the spice levels of a mild green chilli. Once they are roasted and their seeds removed, their spice levels get even milder. 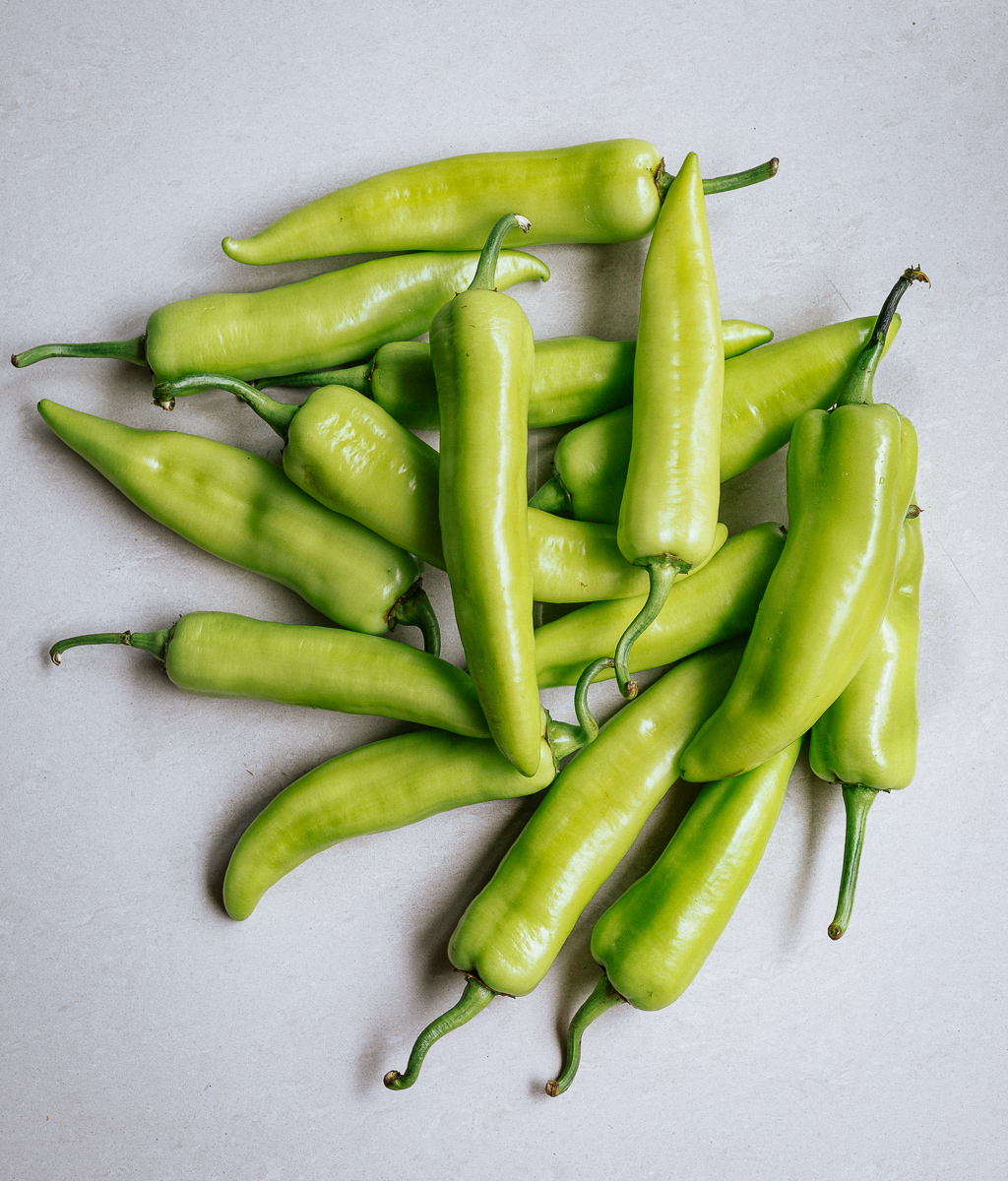 The process to make these rolls is admittedly fiddly, and chances are they won’t be perfectly shaped on your first attempt. Mine weren’t for a long time, but it really doesn’t matter. Tears only require a bit of patchwork to contain the filling, and even if they spill into the sauce, they get baked together anyway. This will hardly make a difference in the final dish. Bakes are very forgiving in this regard. 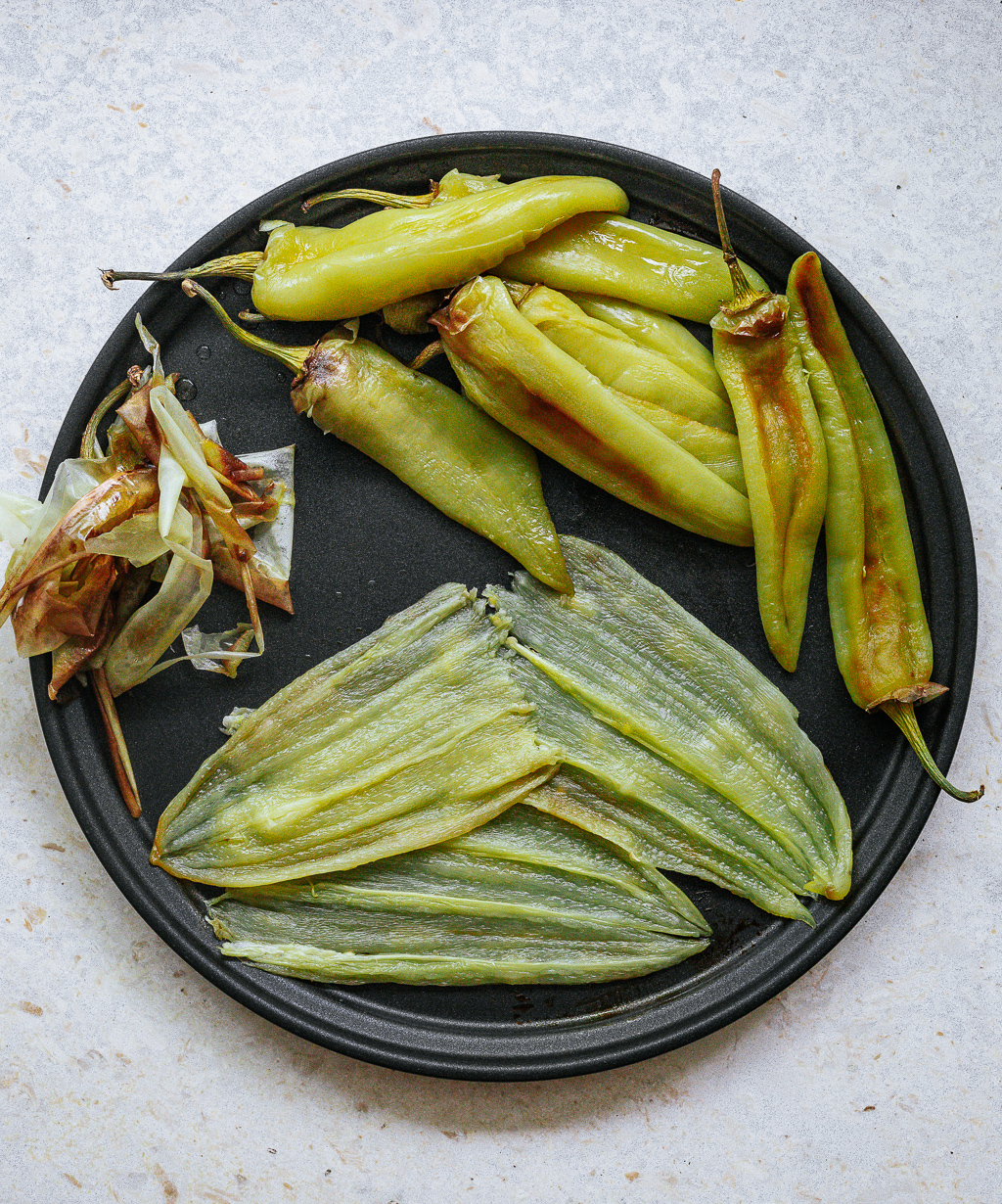 Just so you know what to expect, here’s the process: first roast the peppers. Whilst they’re roasting, make the tomato sauce. Once the peppers are blistered, soft, and cool enough to handle, peel away the papery outer skins. With a little practise, they will come away with one swift pull, but be gentle; you want to keep them as intact as possible. Once you remove the skins, scoop out the seeds and discard. You then open them up flat – like a butterflied squid. Make the filling: blanched spinach, paneer, green chillies and salt get blitzed up into a coarse paste. Then divide the paste between the banana peppers and roll them up as tightly as you can.

A layer of tomato sauce goes at the bottom, followed by the banana pepper rolls. Top with the remaining sauce and grated mozzarella. Bake until the sauce is bubbly and the peppers are yielding. Best served with lots of crusty bread to mop it all up with. 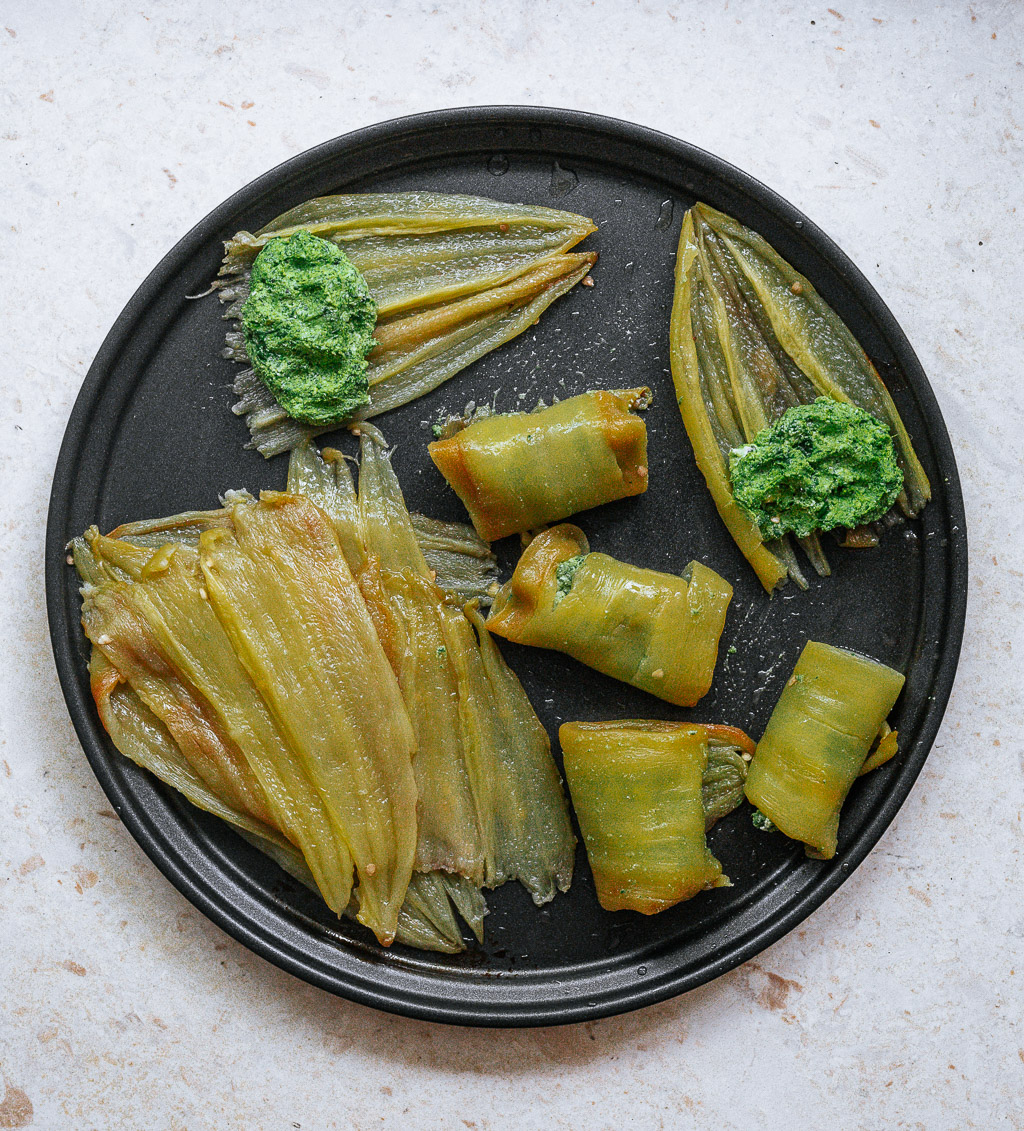 1) The roasting process is simple enough but make sure to follow the exact oven temp. If the oven is set too hot, the skins will blister too quickly and the peppers won’t cook enough to mellow their spice levels. And if the oven is not hot enough, the peppers will cook to a mush and the skins won’t come away easily. This sounds more complicated than it is, but I had to put it out there. It’s an important point to remember.

2) Choose the biggest banana peppers you can find. The bigger they are, the easier they are to handle.

3) I’ll say this again, but it’s not the end of the world if your peppers are not intact. I promise you it won’t affect the taste of the final dish (more on this in the recipe below). 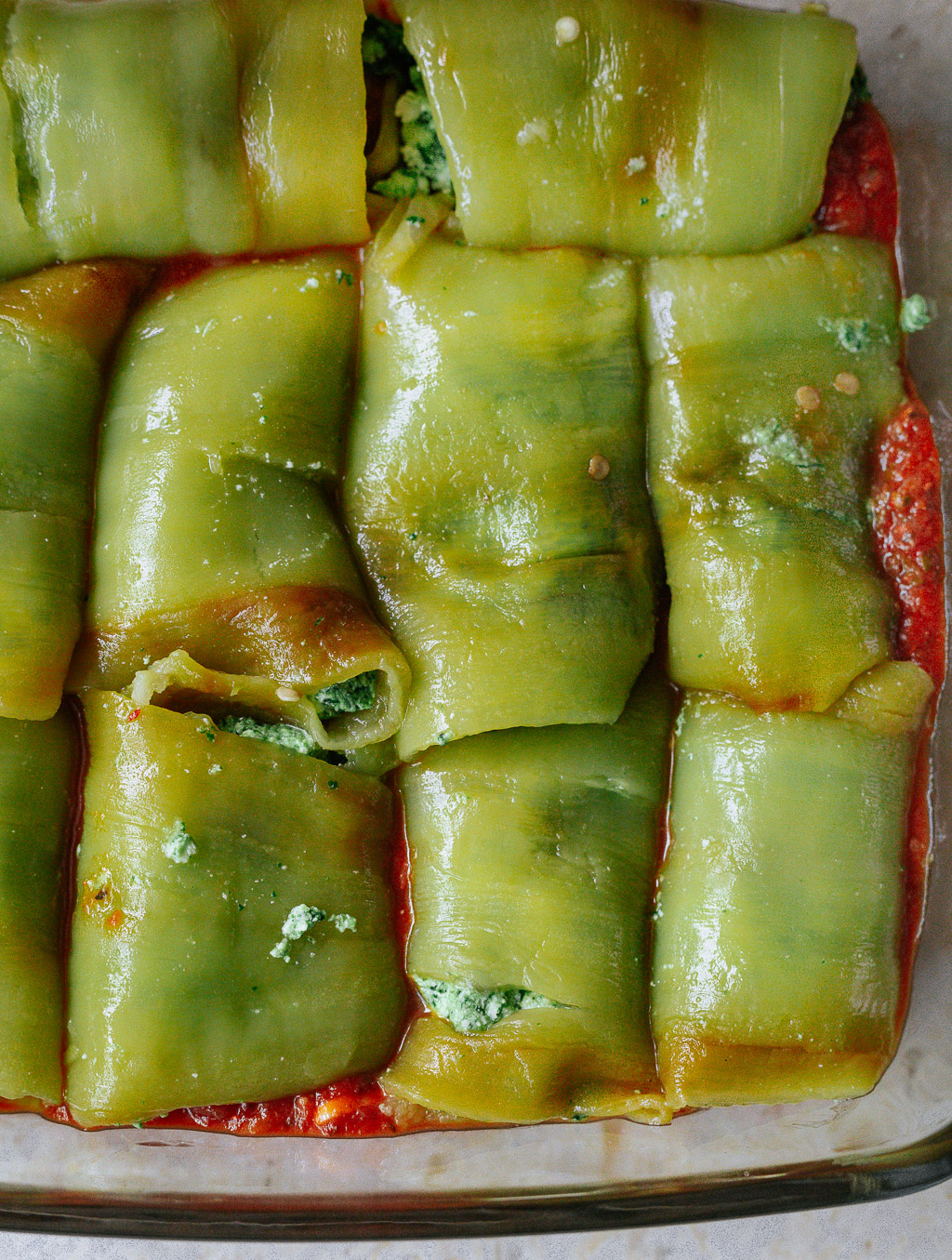 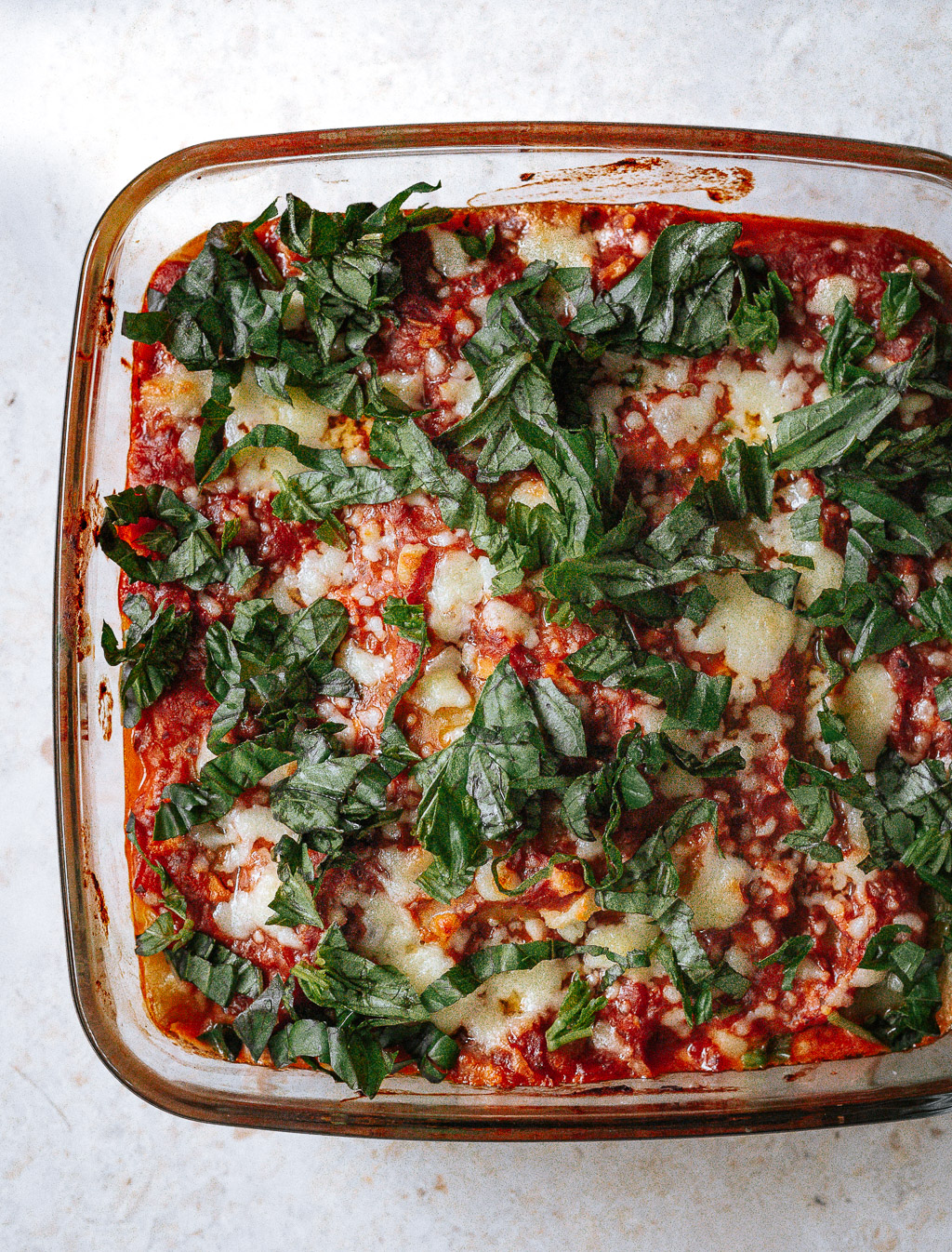 It might take some practise to keep the peppers intact while peeling. In case of tears, just wrap them around the filling even if they start to spill out. It won’t make much of a difference once baked. Can be made and assembled a day in advance. Bake just before serving. Choose the biggest banana peppers you can find. The bigger they are, the easier they will be to handle.
TAGS: Banana peppers,Gluten-free,Paneer,Peppers,Spinach,Vegetarian