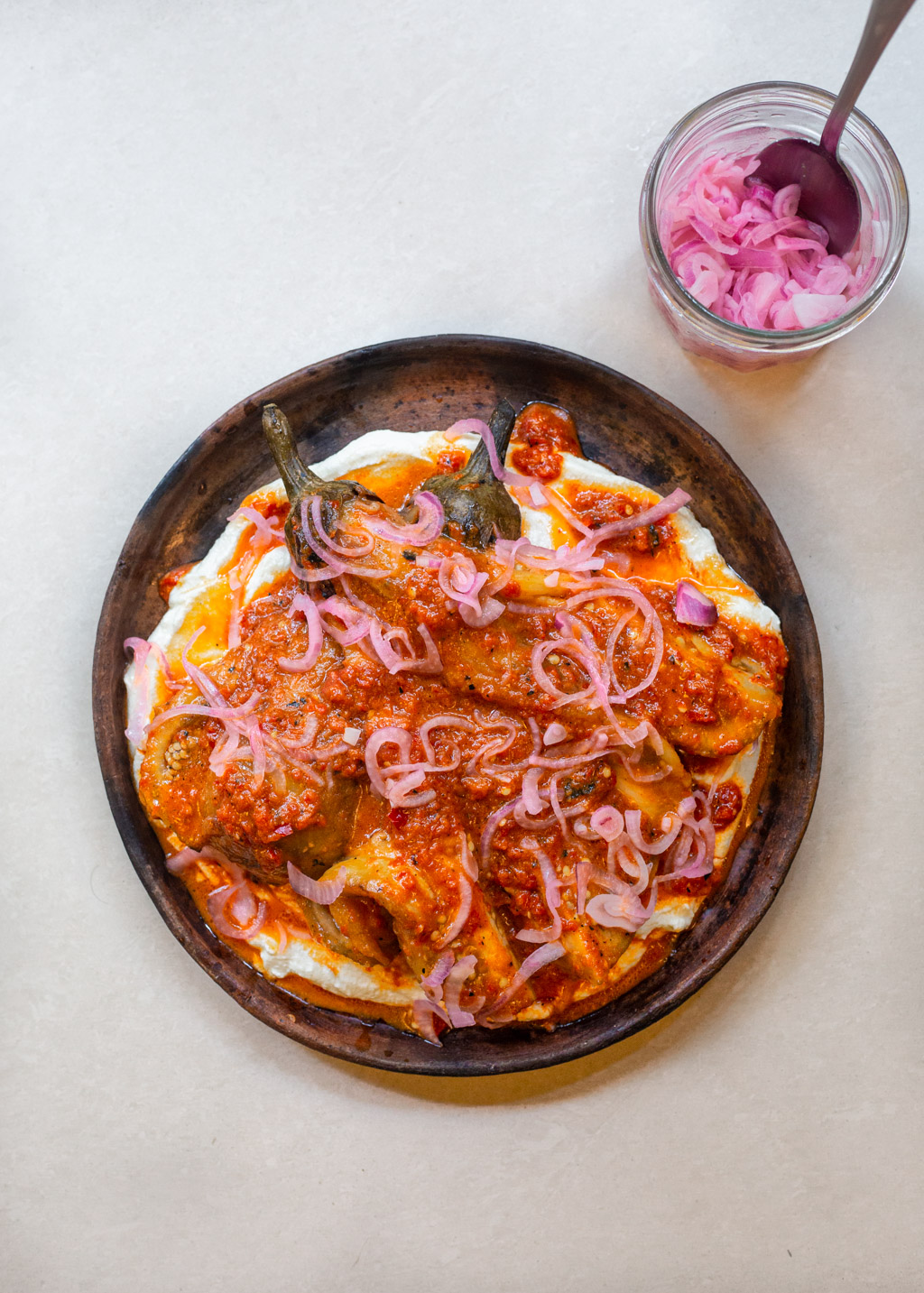 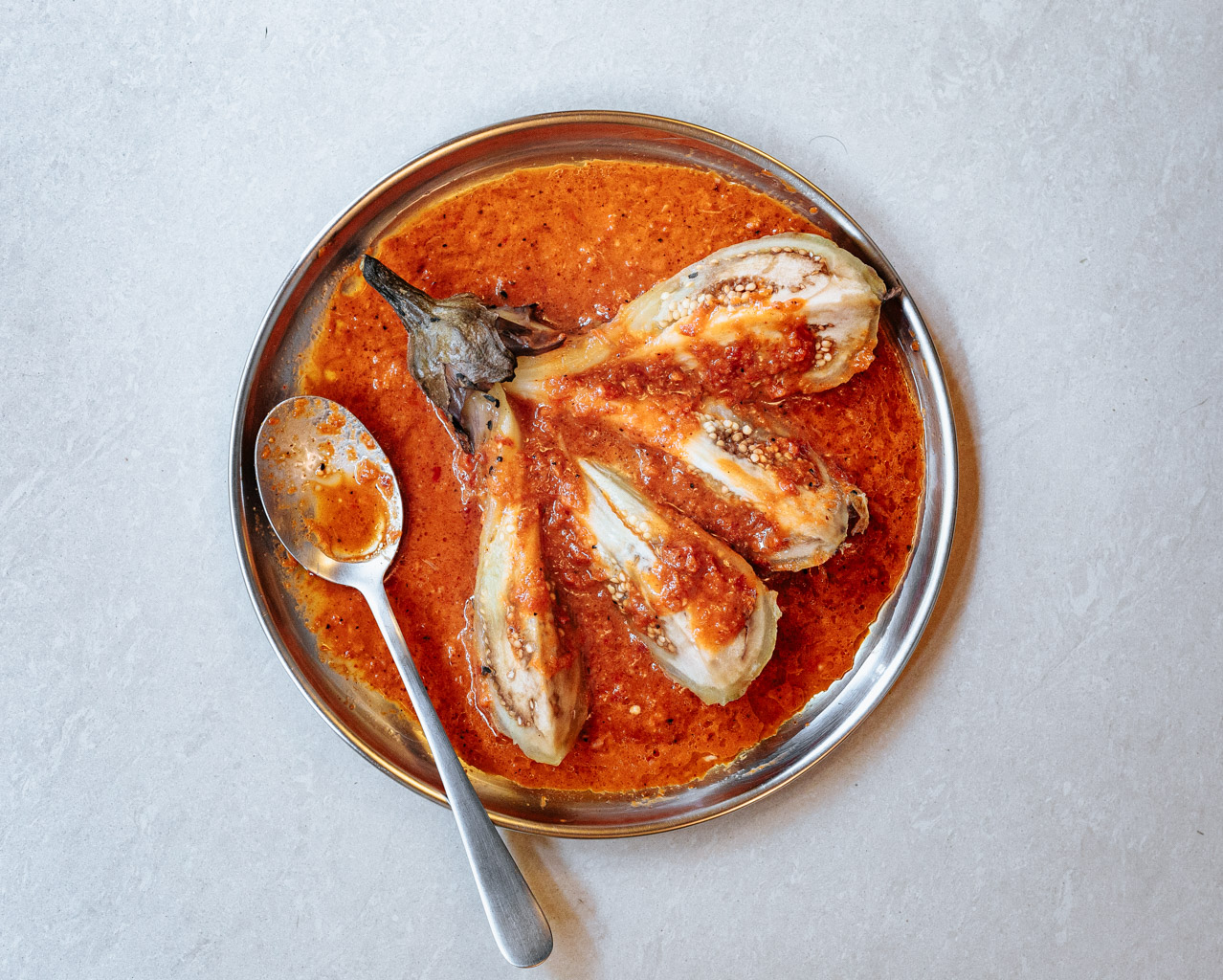 At first glance this dish may look and sound intimidating. And that’s exactly why I did the poll asking if you guys wanted it on here. A whopping 97% of you said yes so here we are! This recipe is loosely adapted from Ottolenghi who makes his version with griddled aubergines and feta. As soon as I came across it in The Guardian, I knew I had to try it. And it was perfect timing too with my big glut of homemade harissa that needed using up.

This dish is a good example of how something that requires multiple steps and components doesn’t necessarily mean that it’s complicated. Sure, a bit of multitasking wouldn’t hurt to hurry things up, but even if you were to just go step-by-step—hopefully enjoying the process while you’re at it—the recipe itself isn’t hard at all. I mean, the first time I made this and attempted everything from scratch, it was for a Sunday breakfast. And I don’t mean brunch at noon. We are early risers that do breakfasts at 8 am.

There are three parts to this dish: the base is whipped paneer. Next, roasted aubergines slathered in a harissa dressing. And finally pickled onions get strewn over the top. Might seem a bit excessive but there aren’t any superfluous steps or components here. And I’ve also broken the recipe down into what to cook first, and what to get on with while something is cooking etc. Efficiency in the kitchen is key. 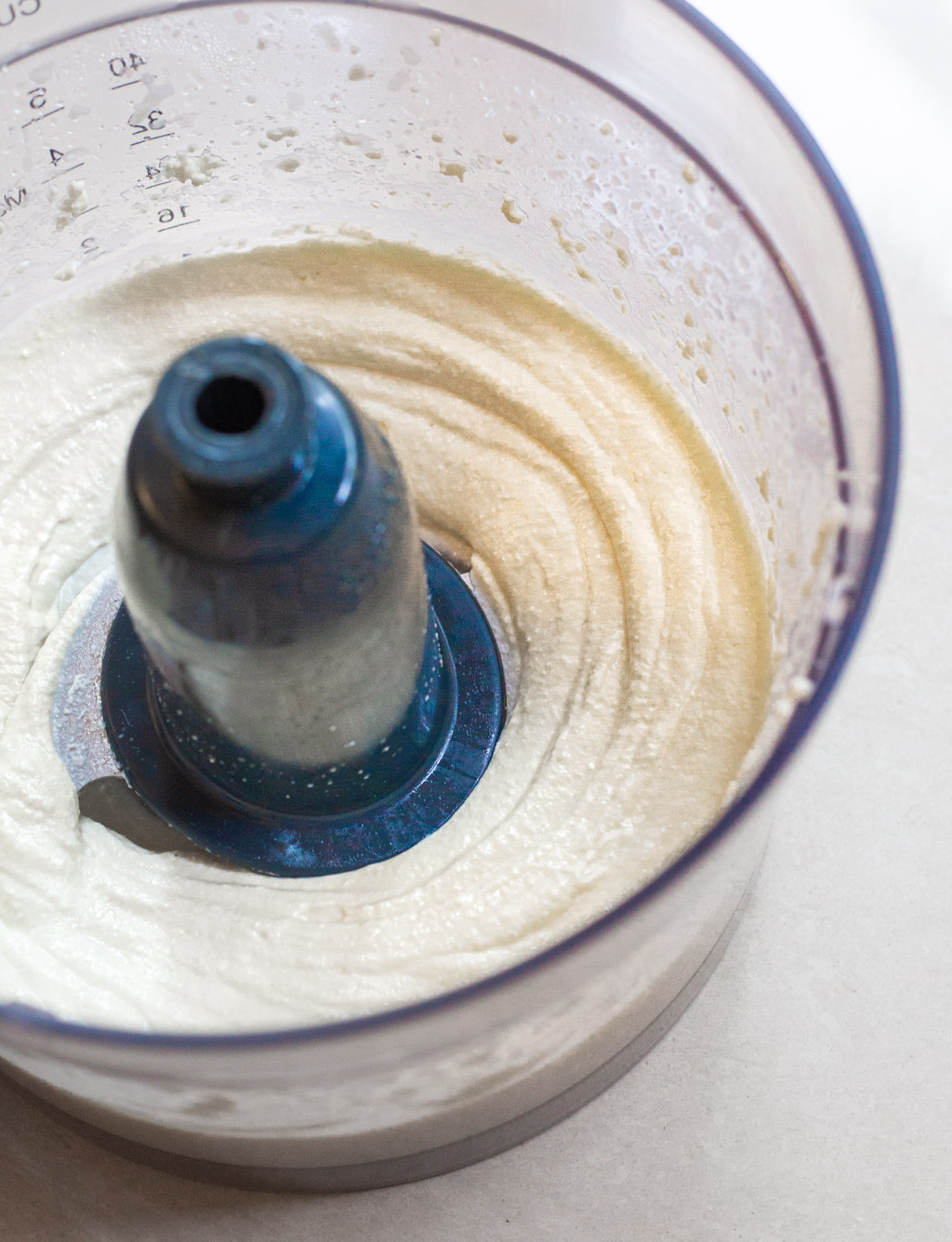 For the whipped paneer component, we make paneer from scratch by curdling milk with lemon juice. A few minutes of stirring and you’ll see the whey separate from the fats. Strain, then blend until smooth using a bit of whey to loosen. I know what you’re thinking, but sadly no, store-bought paneer wouldn’t work here. The main difference between fresh and store-bought is that store-bought is set too hard and all the whey is drained out. You’ll get this light and airy texture only from soft-set paneer. Having said that, store-bought ricotta might work as a good replacement.

The pickled onions couldn’t be easier, and I would definitely recommend doubling or even tripling the quantities. If you have a jar of this in the fridge you’ll end up adding it to everything. Basically thinly sliced onions are steeped in salt and lemon juice, both of which mellow the acrid burn that raw onions tend to have. Do this first so they have time to pickle and soften. 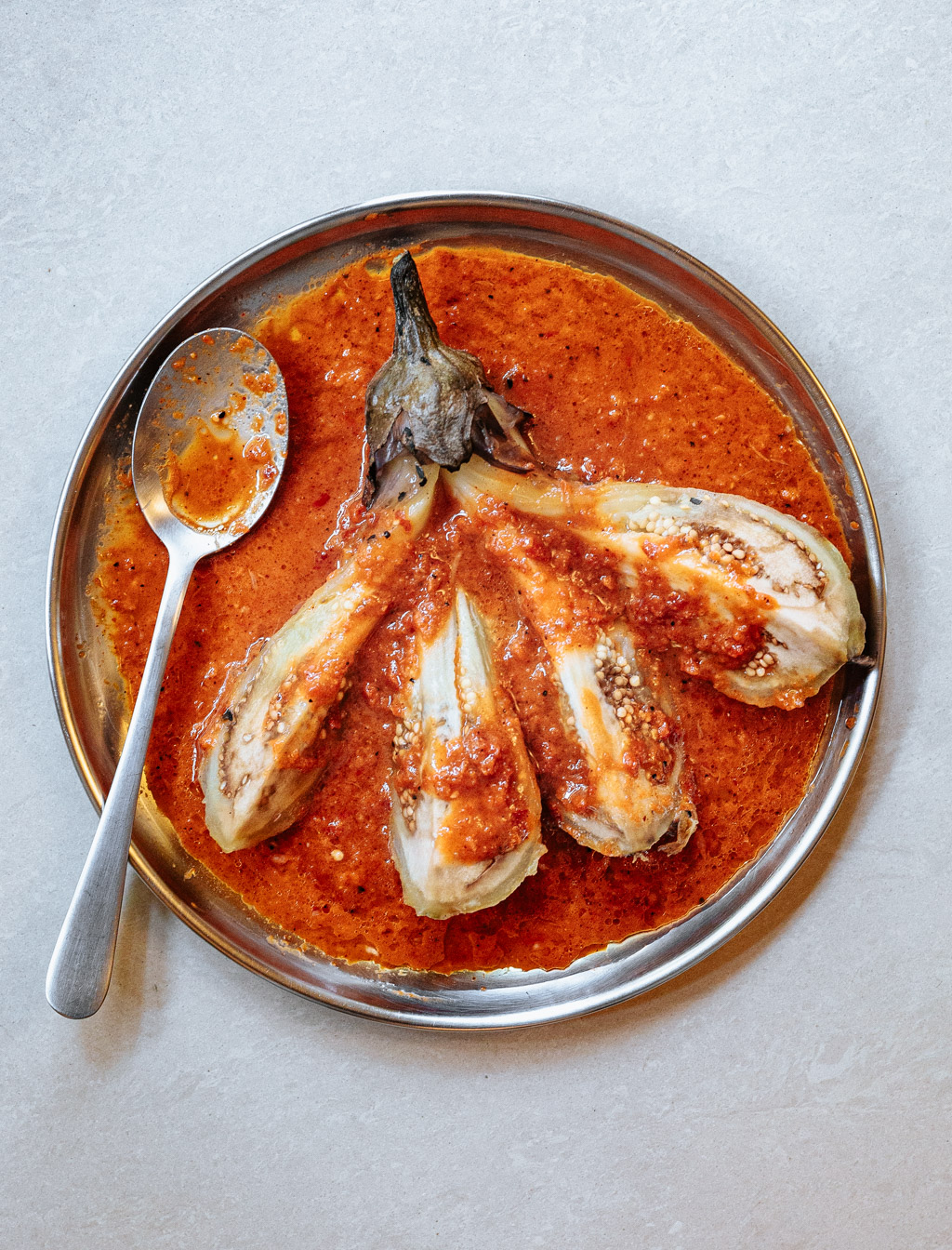 I saved the best for last – the aubergines! Turn two burners up full throttle. Place one aubergine over each burner and get them charred and blistered on all sides. The more blackened they get the softer their flesh will be on the inside. Plus you don’t want to miss out on any of that smoky flavour! Once they’re charred, I steam them for a bit— placed in a  covered bowl—to help the heat penetrate to the middle and cook the insides. Steaming them this way also makes flaking their skins off a lot easier.

And now for the best bit – once I pluck out all the charred skins, I quarter them into four thick pieces while keeping their stalks intact. I think I particularly enjoyed this part because it makes the finished dish look like it was handled by a deft chef, and not someone that has the tendency to accidentally chop off their fingernail with a pair of scissors. I wish I were making this up. 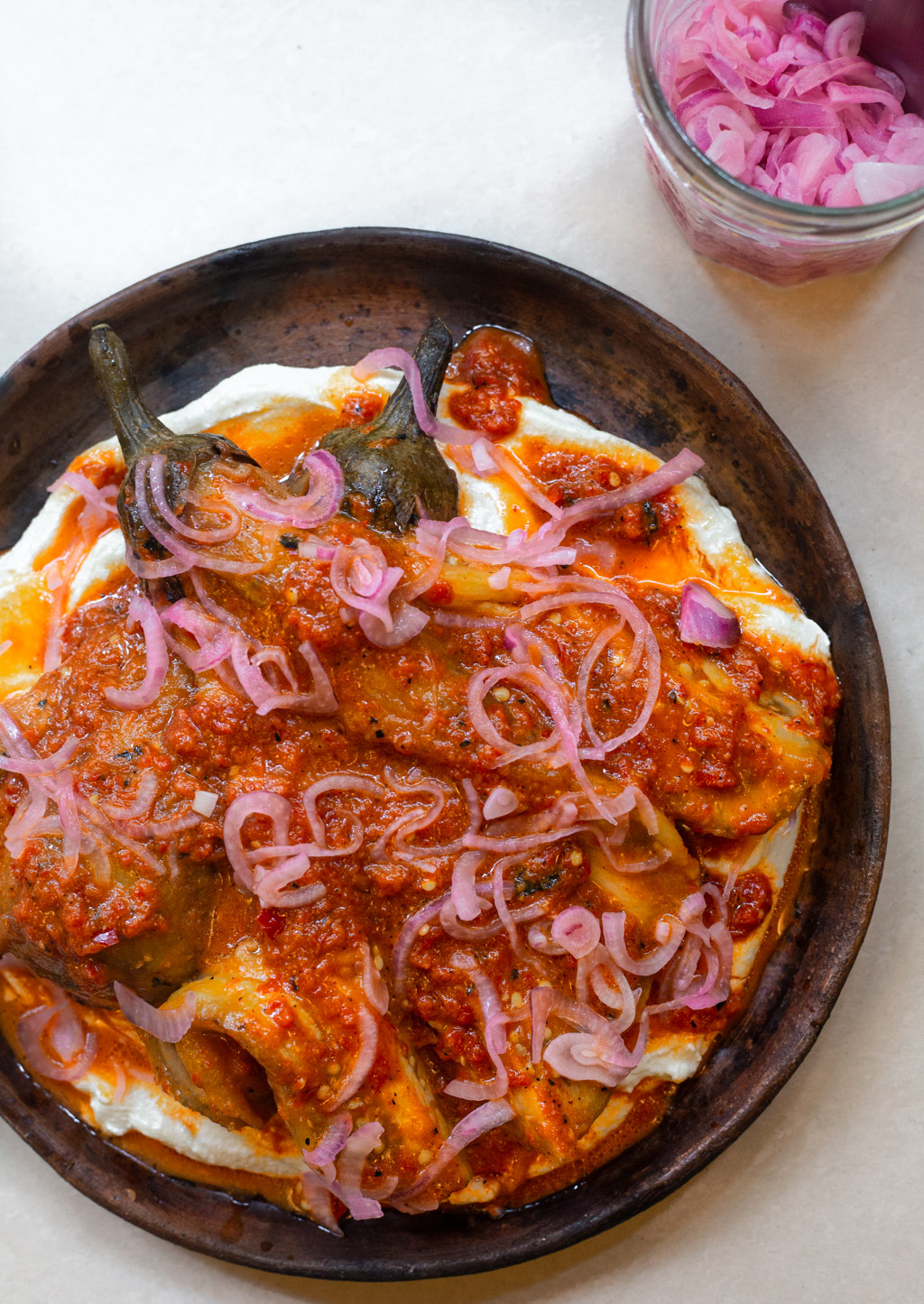 Loosely adapted from Ottolenghi. I used homemade harissa for this which is much milder than store-bought versions. If using bought, adjust quantity accordingly. 1 litre of full-fat milk yields 200-225 grams of paneer. This was perfect for the two of us here.
TAGS: Aubergine,Paneer