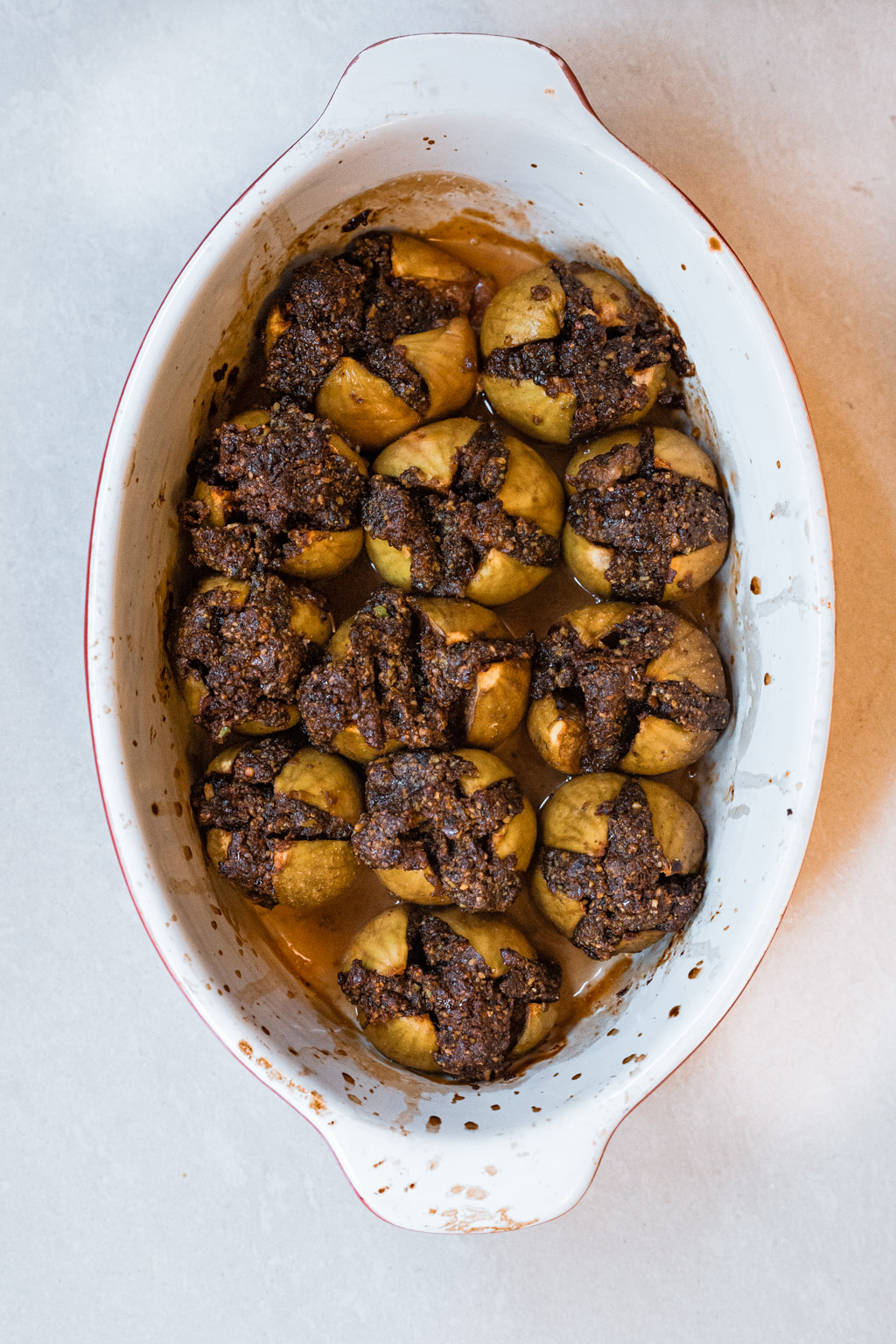 I admit this is not the prettiest dish. But aesthetics go completely out the window when you’re stuffing a squidgy brown paste into something. Trust me, I tried. But one bite of this and you’ll realize that its visual appearance completely belies its taste.

I’m not a big fan of nuts. I don’t hate them per se, but I’m definitely not one of those people that munches their way through an entire bowl in one sitting. Mindlessly or not. So I try to find other palatable ways to incorporate them into my diet. This was one such experiment.

I found some nice plump figs at the store the other day and knew right away that I wanted to stuff them (and not just into my mouth). With the weekend round the corner and my brain buzzing with ideas for Sunday breakfast—a cheesy frittata and roasted sweet potatoes were already on the agenda—I didn’t want to take on something cumbersome and complicated; I wanted a fruit component, and I wanted it to be simple to make.

Keeping with the Mediterranean theme of the figs, pistachios seemed a great nut of choice. And to make sure I wasn’t blurring the lines of breakfast and dessert – dates. There’s no sugar, honey or any other sweetener here other than dates. They provide ample sweetness, in fact so much so that we ate them with a dollop of plain yogurt to balance out the flavours. Having said that, you could totally serve this for dessert. With some cream, or some custard, maybe? 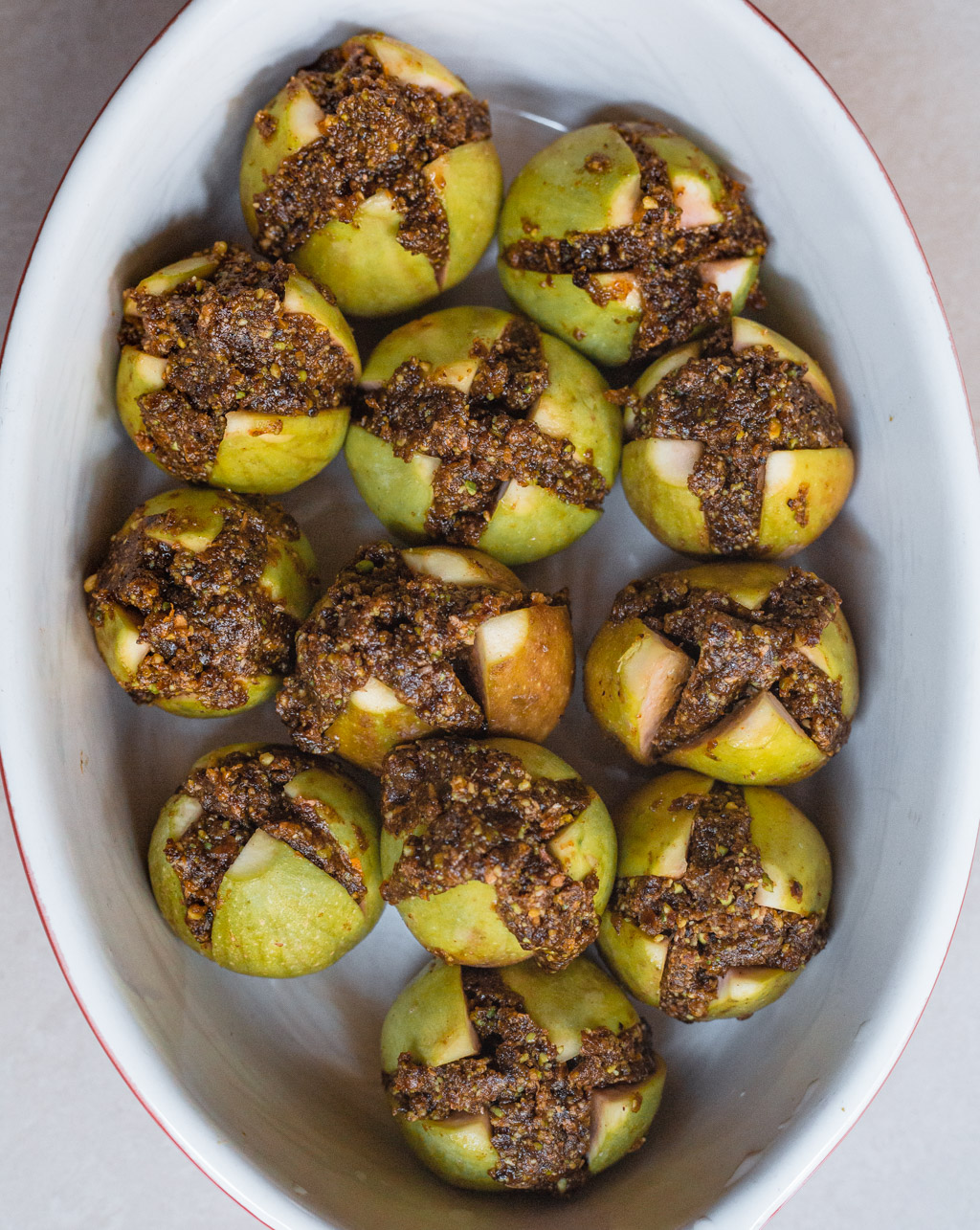 You’ll notice that there’s a really scant amount of butter in this recipe. Pistachios have enough natural oils present in them to do away with adding more. (The butter is here just for some added flavour.) The dates, also blended, help form this stuffing into a paste.

Orange zest—the zest of an entire orange—provides freshness, and the juice gets squeezed over the top before they get baked. For two reasons: flavour, and also to moisten the figs so they don’t dry out. As an added bonus, when baked, the orange juice along with the natural sugars in the figs, forms an orange syrup at the bottom of the baking dish. Spoon this over the top when you serve.

Stuffing these little things might seem mad fiddly but they’re deceptively easy to do. But if for whatever reason you don’t want to be tackling this task in the morning, do them the day before and keep refrigerated. Bake just before serving. (Note: place them snugly in a baking dish; too much space in between would result in the syrup evaporating too much.) 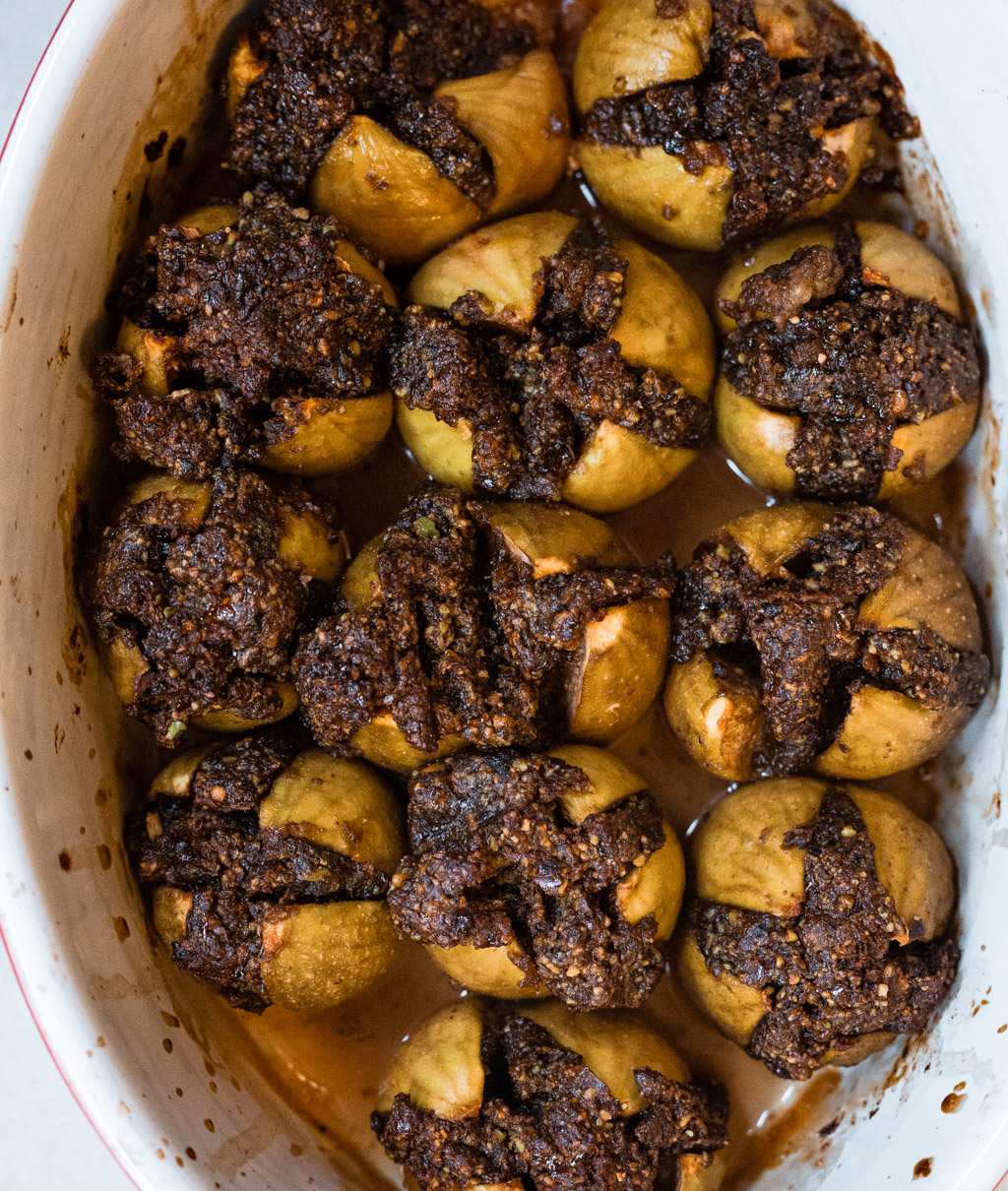 BAKED FIGS WITH PISTACHIOS AND DATES

The dates that I used were quite dry and small. Use fewer if using large juicy ones.
TAGS: Figs