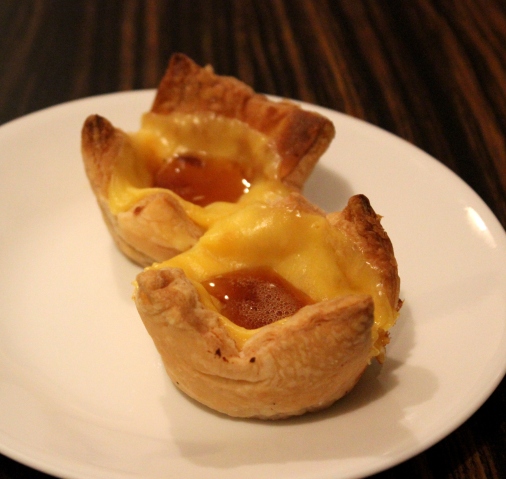 On a bit of a whim, I decided to make tarts. Portuguese style. Speaking of whims, I also ended up indulging in three of Jamie Oliver’s cookbooks. Known for his clever twists on re-creating classics in record time, it didn’t seem like the best idea to play around with one of his recipes. But I did. And as Jamie would say, “It was bloody brilliant!” I think some rules were made just to be broken, really.

Having spent the better part of the day watching sophisticated, intellectual TV shows (Ok fine, it was Breaking Bad), I was in the mood to take a page out of Jamie’s mind and make something special for the family. The recipe looked fairly simple, but I certainly judged this book by its cover – the pastry twisting technique that is used for Portuguese tart making is easy to do, but not really possible to get right with the size of pastry sheets that I had access to (mine were too small, and hence the surface area wasn’t quite enough) What I ended up with was a sticky ball of goop stuck to the bottom of the tray. Improvisation – I just laid out a single pastry sheet cut a little bigger than the size of an individual muffin hole, and voilà! Pastry sorted. For the custard topping, instant custard powder and milk did the trick; that leaves us with a healthier option too, since the crème fraîche is out of the equation. That one just landed in my lap!

Here is my recipe, but feel free to do as I did and go with your own sense of what will work for you.

A good pinch of ground cinnamon

4 tbsps castor sugar (plus 3 tbsps for the custard)

Cut out 6 squares of 6″X 6″ pastry sheets and sprinkle a generous amount of cinnamon over each. Lay them out in a muffin tray with each piece slightly coming over the edges to the top, making sure that the sides are well covered (slightly overlap the edges inside the mould so that there are no gaps) Bake in the top shelf of the oven for about 10 minutes, until crispy and golden. Set aside for now.

In a small cup, add a few teaspoons of milk to the custard powder and mix well until all the lumps get dissolved. Heat the rest of the milk until warm, add in 3 tablespoons of sugar and the vanilla. Stirring continuously with a wooden spoon, add in the custard mixture into the milk, until it thickens and coats the back of the spoon (you’re looking for a semi-runny consistency) Grate in 1 teaspoon of orange zest, and set aside to cool slightly.

Take the muffin tray out of the oven (if there are a few bits of pastry sticking out too much, push them back down slightly using your fingers – you want them to resemble small cups) Spoon the custard mixture into the tart cases and put them back in the oven for a further 7-8 minutes.

In a saucepan over high heat, squeeze in the juice of the zested orange and add 4 tablespoons of castor sugar to it. Swirl the pan around until the sugar dissolves, and keep an eye on it until it caramelizes and goes dark brown.

Pour the caramel over each tart, before serving.

Ratatouille with pesto cheese ~ You know how you e

This won’t come as a surprise at all. Even if yo

Not a tooth in sight, but vouches for the quesadil

Greek scrambled eggs aka strapatsada aka one of th

Read an article about making pesto by hand like an

Chicken salad with tahini dressing aka a Caesar-bu