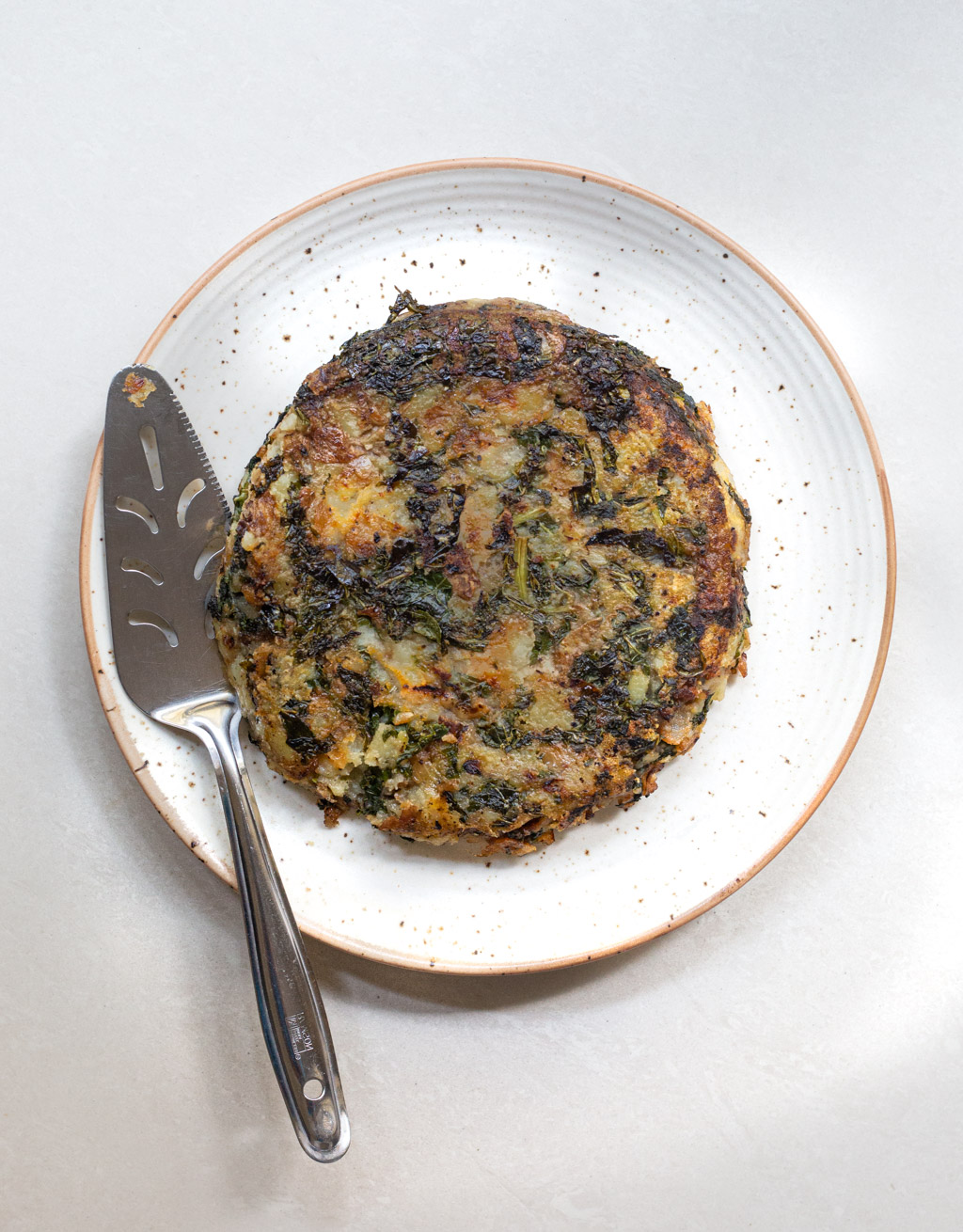 I know ‘bubble and squeak’ sounds like a made-up name to sneak veggies into your toddler’s lunch. Unfortunately though—at least for those of us that enjoy quirky food names: oat-thappams, anyone?—it’s pretty straightforward. Bubble and squeak originated in the UK and was a dish of cabbage and fried meat. And the name came about because it would bubble and squeak as it cooked together. I don’t know at what point the meat was jettisoned from it, but nowadays it’s made using leftover mashed potatoes (often from a Sunday roast) and vegetables (usually savoy cabbage and/or greens).

It looks like a frittata but it’s definitely not a frittata. In fact the similarity between the two ends there. Frittatas are predominantly eggs with cheese and some other bits and bobs (think a giant omelette), while a bubble and squeak uses no eggs; it’s basically a ginormous pan-fried vegetable cutlet/patty. Other than potatoes, your veg of choice, onions, butter, and a sturdy pan, you don’t need much else to dish it up in 45 minutes. Even less if you’re using leftover mash. 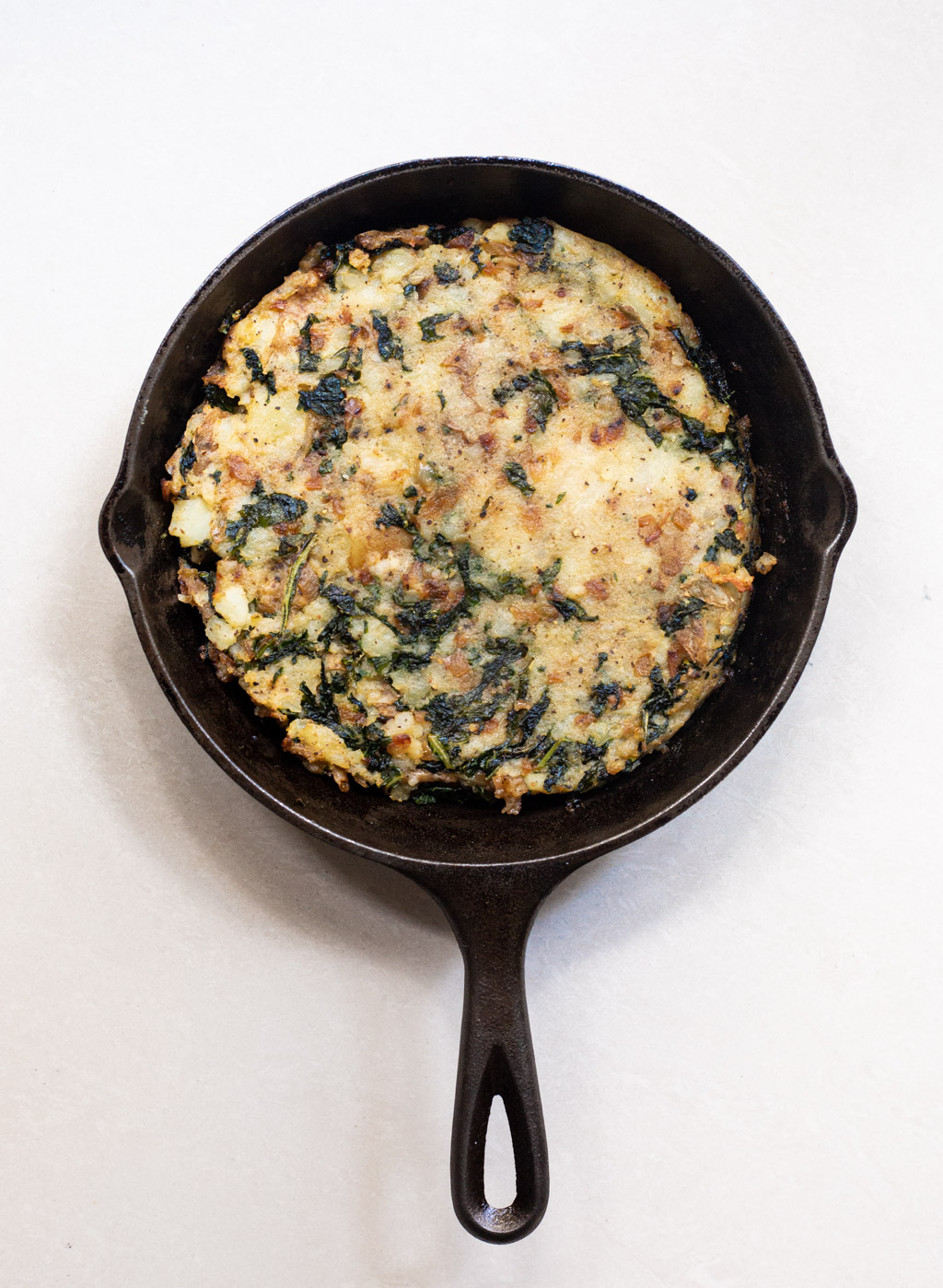 I made this recipe using kale and it holds up really well to the slightly prolonged cooking time (spinach wouldn’t work I think for this reason). It needs something hardy. If you can’t find kale, Chinese cabbage would be a good substitute. I haven’t tried this but I’ve seen numerous recipes that use other vegetables too – carrots, broccoli, cauliflower, peas. As long as you have a ratio of at least 50:50 potato to veg, it’ll hold as it cooks. Maybe it IS a good name to sneak some veggies into your kid’s food after all!

I plan my meals in advance, so if I’m making this dish down the week I’ll cook a few extra potatoes and stash them away. Not like this recipe is hard to begin with but this makes things doubly easy. If using leftover mash you wouldn’t have the skins left on. This is completely fine, traditional even. But I find that since the bubble and squeak gets pan-fried first, the skins give it great texture. So don’t peel the potatoes if you’re cooking them from scratch. Just add salt and roughly mash before using. 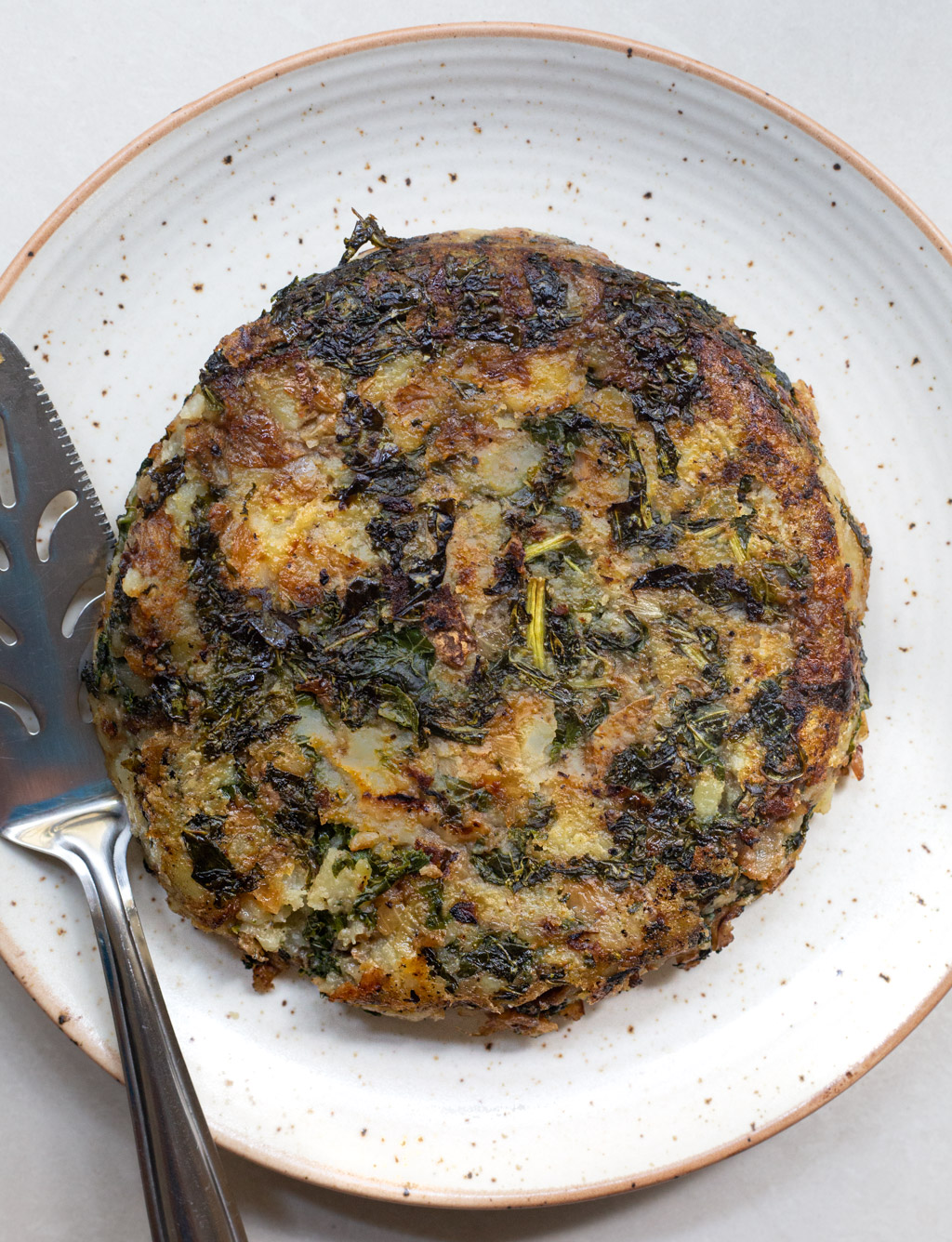 Speaking of traditional, once the bubble and squeak browns on the bottom, you’d normally loosen the sides, hold a large plate over the pan and flip it over. More butter is added to the pan and it’s then gently eased back to cook the underside. Basically it’s cooked entirely in the pan without an oven in sight. If you want to do it this way it might end up falling apart a bit as you flip. Just patch it back up and you’re good to go. (I’ve added instructions for this below.)

I however, didn’t want to attempt this fliparoo feat. So I added tiny knobs of butter along the sides and top and bunged it in the oven to finish cooking. Cut into wedges and serve straight out of the pan. Or if you’re feeling brave, run a knife along the edges to loosen, say a little prayer and flip onto your serving plate. Again, just patch it up if some pieces fall apart. Say it’s meant to look ‘rustic’/’homey’ and call it a day. You’ve done that too, right? 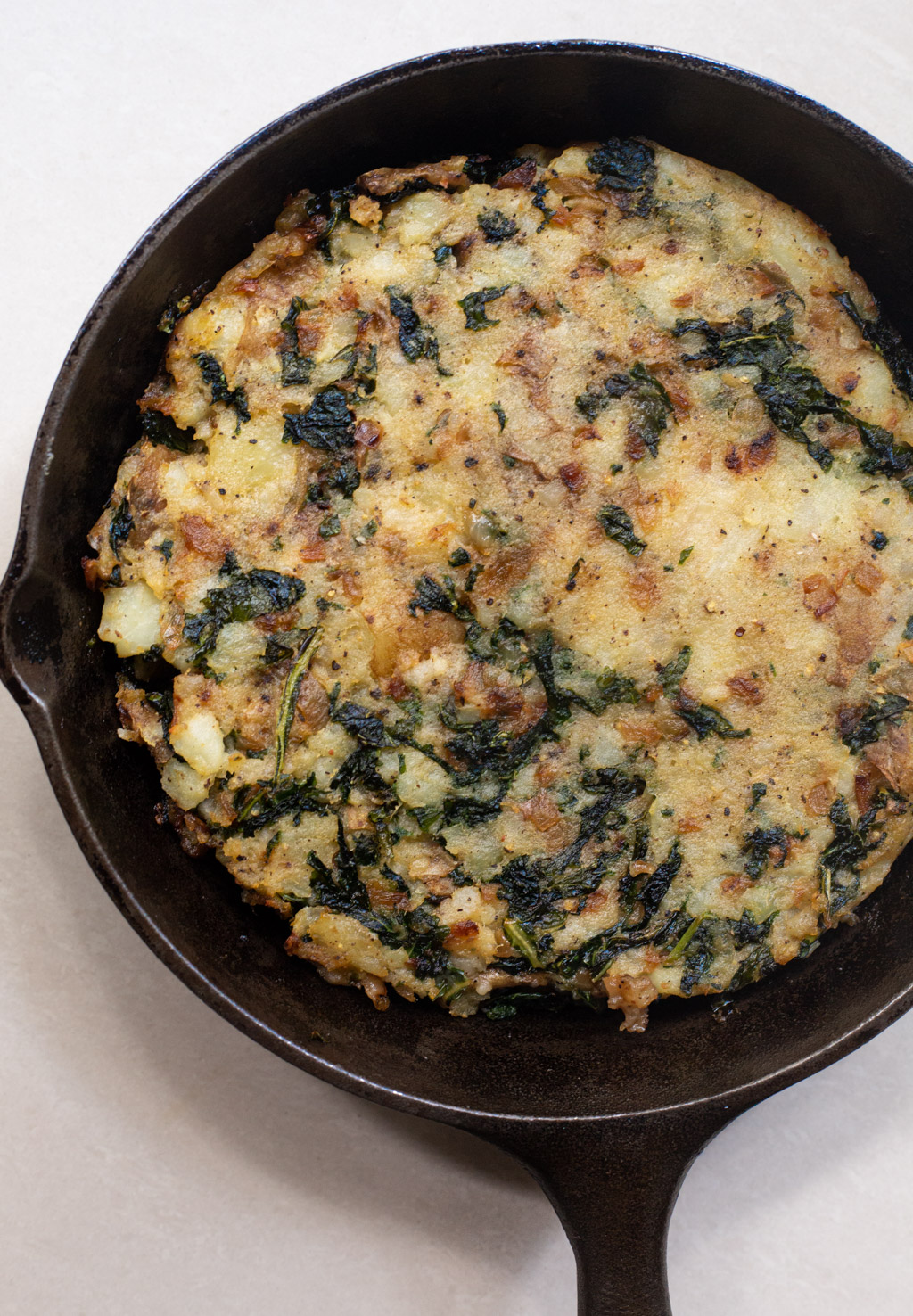 Chinese cabbage is a good substitute for kale in this recipe.
TAGS: Kale