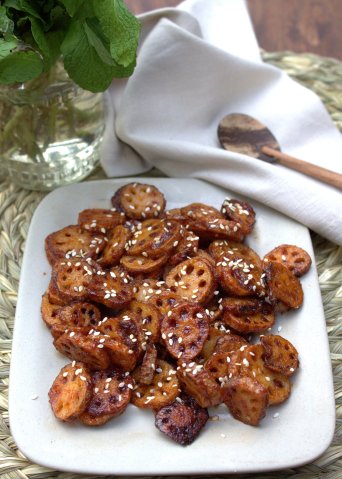 I have this really annoying habit. I like to peer into other people’s shopping baskets to see what they’ve bought, and try and figure out what they might end up doing with it. I mean, I think you really can tell a lot about a person by what’s in their grocery basket. Shopping cart psychology – when you see a packet of crisps, you’re also most likely to see a few cans of Coke in there. Canned food, Ramen noodles, and beer : college kid. Canned (baby) food, high-fibre noodles, and chamomile tea : new mom. Not the biggest revelation I know, but you get my drift.

I’m not sure what that says about me, but if the person has a good read, something along the lines of “is she shopping for three different households?” might enter their mind. 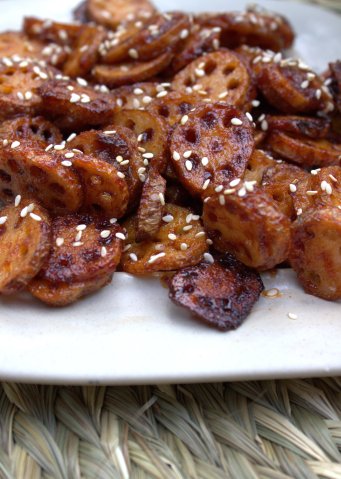 When I come across something that I’ve never seen or heard of before, I’m most likely to pick it up anyway and ask the person at the check-out counter what it is, while simultaneously looking it up to confirm whether he/she is right. I have a legitimate reason for my constant doubting though : the last time I picked up leeks and it showed up on my bill as celery, she was insistent that that’s what it was. I mean, c’mon.

When I bought these lotus stems at my local grocer and took it up to the counter, the manager had to be summoned to figure out what it was. After a bit of poking and prodding (and after I confirmed that they were definitely not sweet potatoes or a native variety of yam), he made a new entry in his system that said “lots stem”.

Sesame seeds (for sprinkling over the top)

Place the lotus stem in a bowl and sprinkle over corn flour and rice flour. Toss gently until evenly coated, and deep fry in oil until lightly browned. Transfer onto paper towels to drain off the excess oil.

In a small wok over low heat, combine the soy sauce, ketchup, vinegar, chilli powder, and honey and stir gently. Taste and adjust the seasoning at this point (you may not need to add salt since the soy is already salty). Once the sauce is heated through and thickened slightly, about 3 – 4 minutes, add the fried lotus stem and toss to coat all the pieces evenly. Sprinkle with sesame seeds and serve immediately.