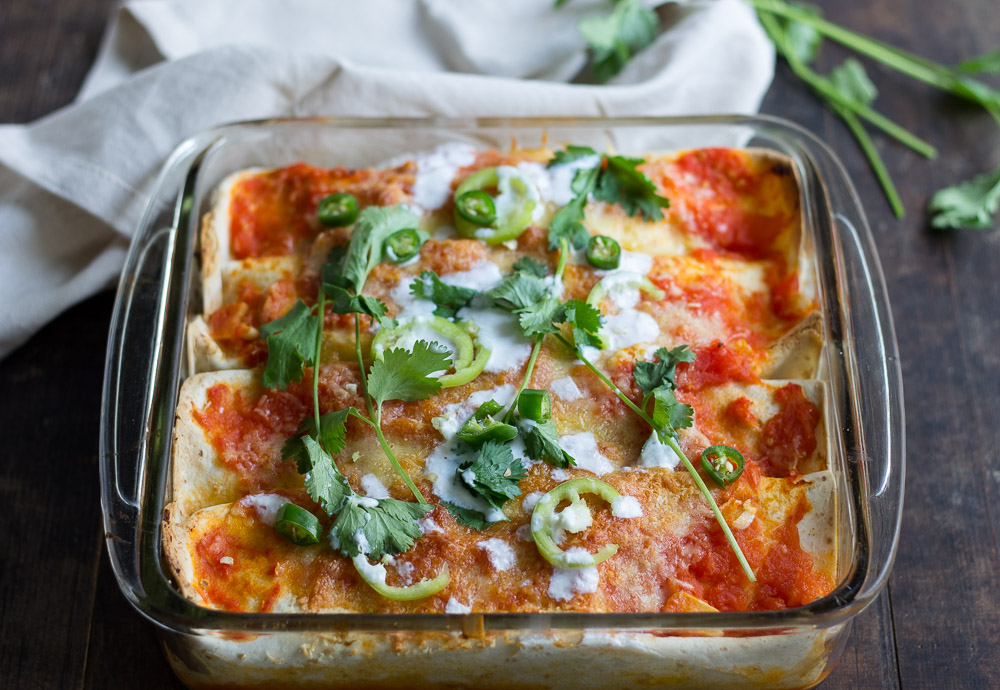 Never before have I been excited at the prospect of making a vegetarian version of an enchilada, but the vibrant tangle of peppers lured me in. I had a recipe for inspiration but because I’m just so rubbish at following them I didn’t do exactly what was instructed; I added beans – pre-cooked and mashed with some spices (a slight riff on refried beans), threw in sliced mushrooms and added banana peppers for some heat. The recipe also called for homemade tortillas (which I had grand plans of making but never did), but you’d be glad to know that store-bought ones work just as well. For a non-vegetarian version, use minced beef or lamb.

I absolutely love banana peppers and tend to grab them by the handful when I find some at the store. If you don’t have any, substitute with jalapeños or green chillies. I prefer a red sauce to white (here, and in general) not just because it’s more visually appealing, but I feel it has more tang and flavour than a cheese-based one. And for this reason, I’m afraid to admit, I am not the biggest fan of mac and cheese. In fact, there’s very little that I actually like about it. There, I said it. It’s out.

If you have your sauce made and the beans cooked, assembling and cooking the dish comes together in a snap! I call dibs on the crispy bits.

They provide a different dimension of flavour here that you just can’t get with using only green chillies. I hope you like this, Kalyani!