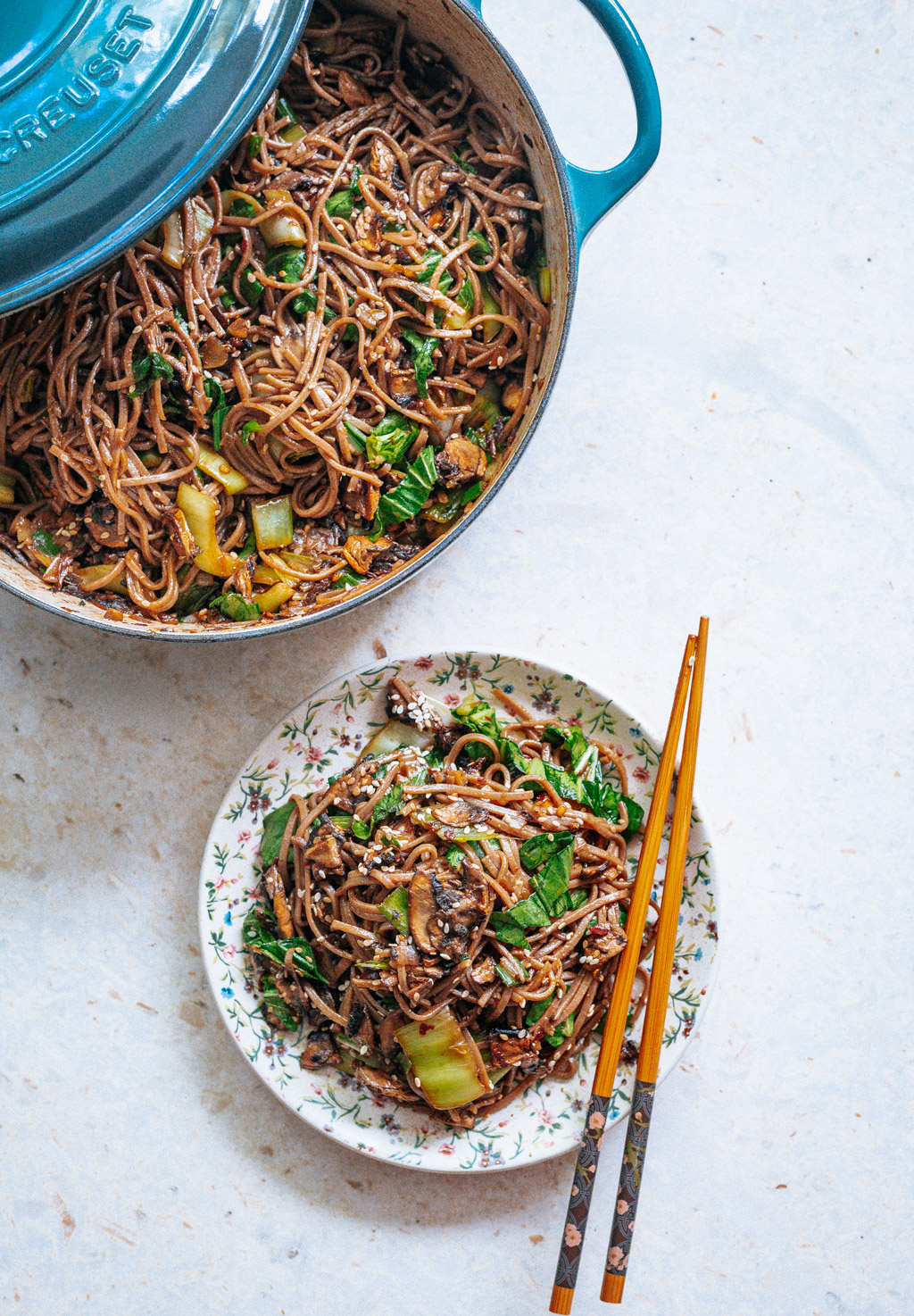 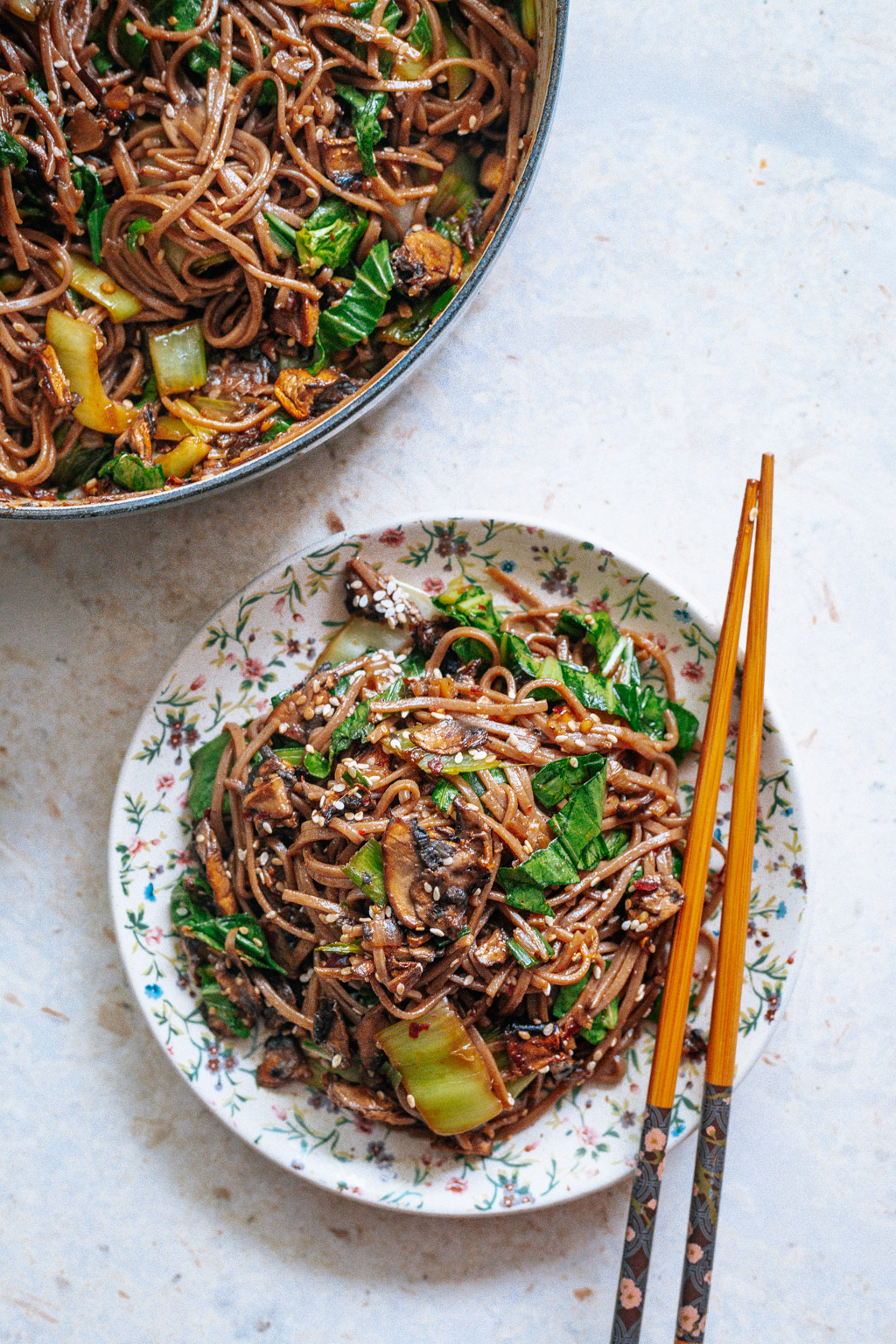 I love a good teriyaki sauce provided it’s not too cloyingly sweet. Which, unfortunately, always seems to be the case with most dishes/recipes associated with the name. So although I say teriyaki here, you’ll find that it doesn’t really have that same sweetness that you might expect from it. All the same flavours, only, not as sugary. (If you’d like to bump up the sugar, by all means do.) 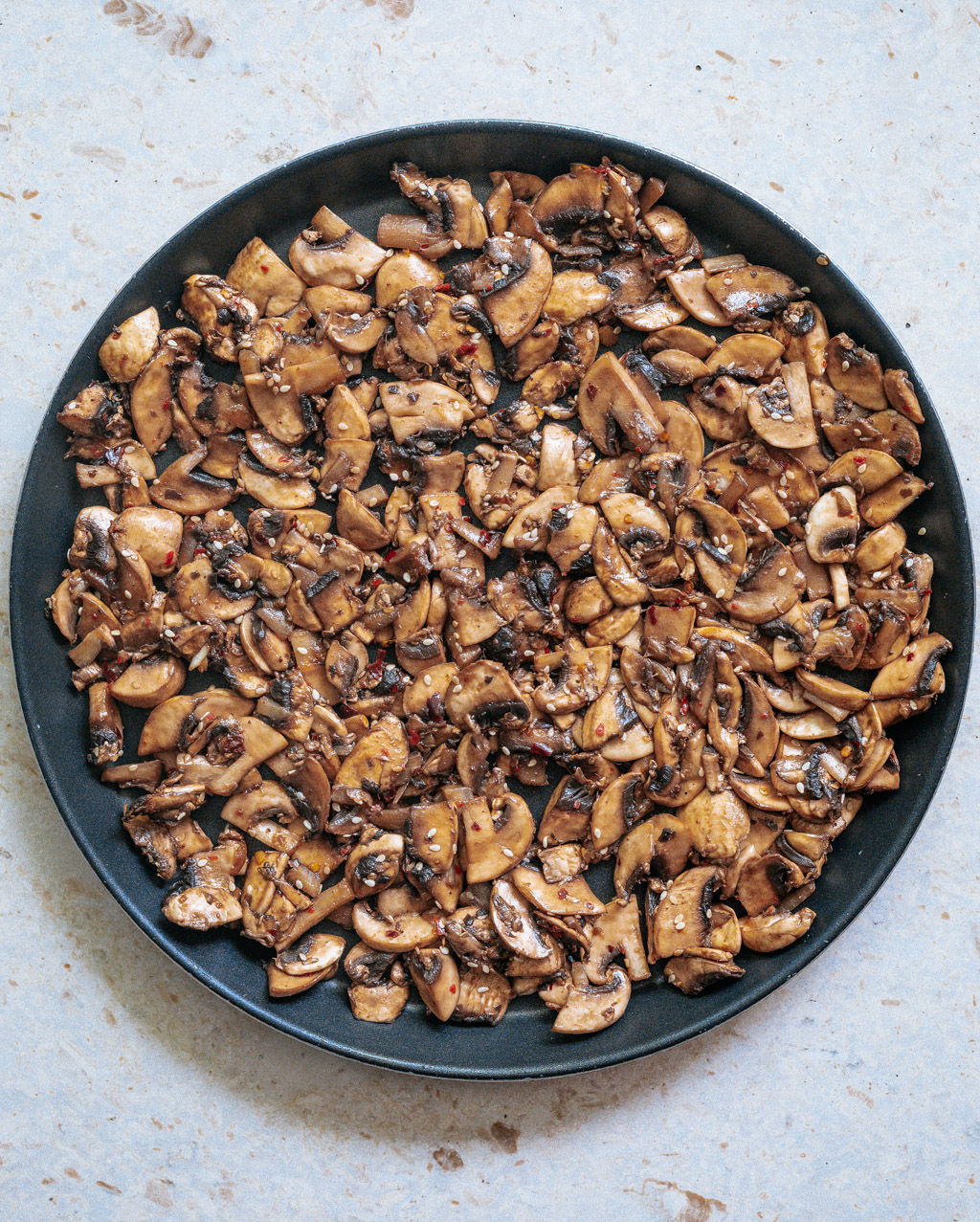 Now that we have that part out of the way, onto my spiel about mushrooms and how they react to heat. I talked about it in my previous post, but here’s a quick recap without going into too much detail. Mushrooms have a high water content making them susceptible to leach out all their liquid whilst cooking under low temperatures. Aka making them soggy. So tl;dr: cook them at the highest temp and as close to the heat source as possible. Here I roasted them at 220 C, and in the top rack of my oven—both of which are crucial—to ensure maximum browning.

500 grams of mushrooms and it serves 2?! Not a typo. They shrink and shrivel up as they cook, so you’d be surprised at how this huge mound gets reduced to such a scant amount of straggly bits in the end. If you’re not able to get your hands on bok choy, broccoli makes for a good swap. 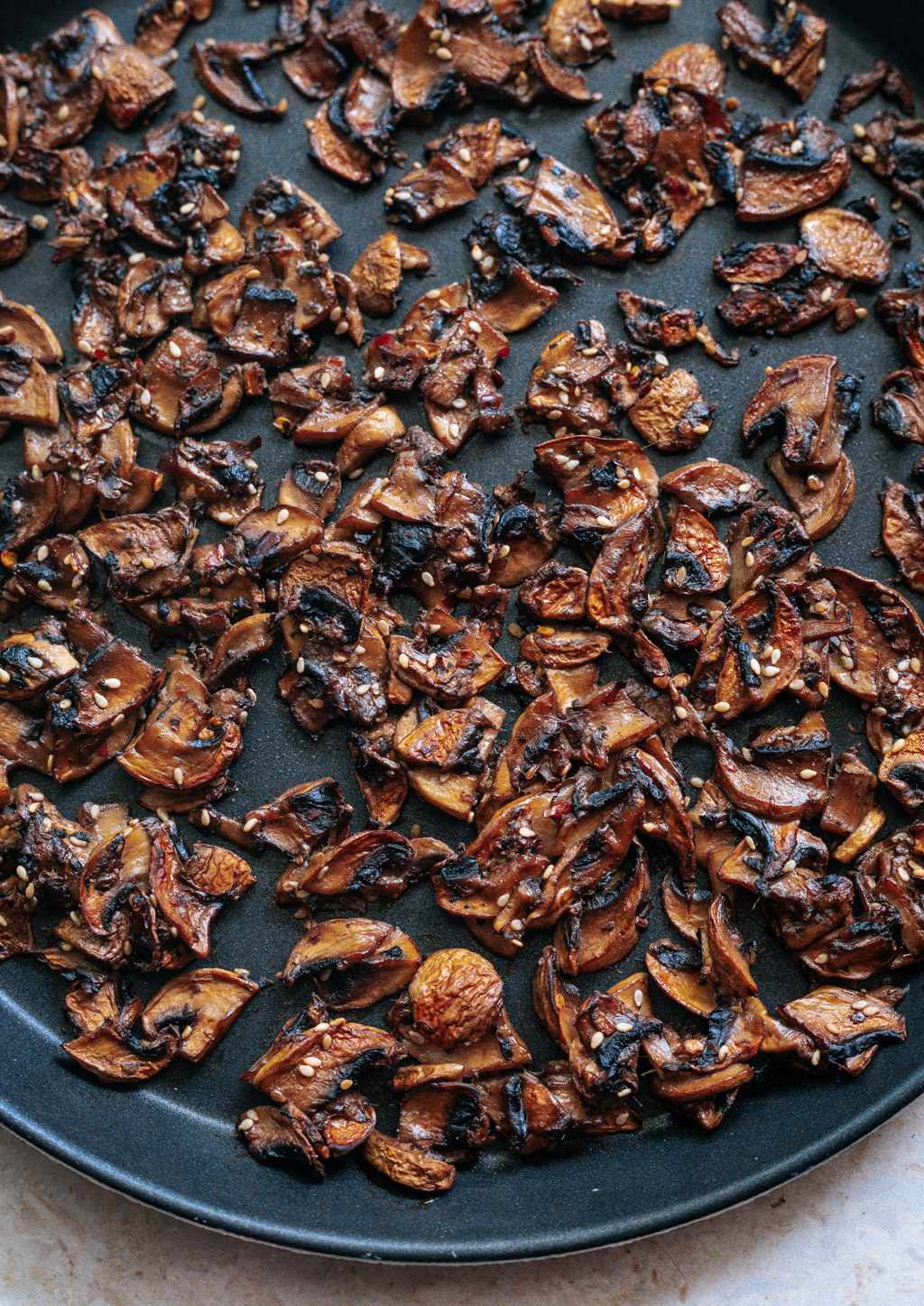 It’s common to have a ‘wok sauce’ to season your stir-fries. It usually has soy, aromats such as garlic and ginger, and oyster sauce/vinegar etc. depending on the dish. I knew I wanted to roast the mushrooms in a teriyaki marinade so I went ahead and did that. I then realized as I was getting to the part of making my wok sauce that I’d have all the mushrooms juices remaining. Would be a shame to throw it out, so why not double it as a wok sauce? I rolled with that thought and here we are. Marinade + wok sauce combined.

You stir a bunch of ingredients together and  marinate the mushrooms in it. Before roasting, squeeze out the mushroom juices back into the same bowl and voila, that’s your wok sauce. This watery “sauce” gets reduced to form a sticky glaze in the pan. It’s genius (not so humble brag), you’ll see how.

Note: I’ve used my homemade chilli oil here. The amount of chilli flakes in the recipe has been adjusted based on the addition of chilli oil. If you plan to use only chilli flakes, I would start with 3 teaspoons, taste the final dish, and add more if necessary. 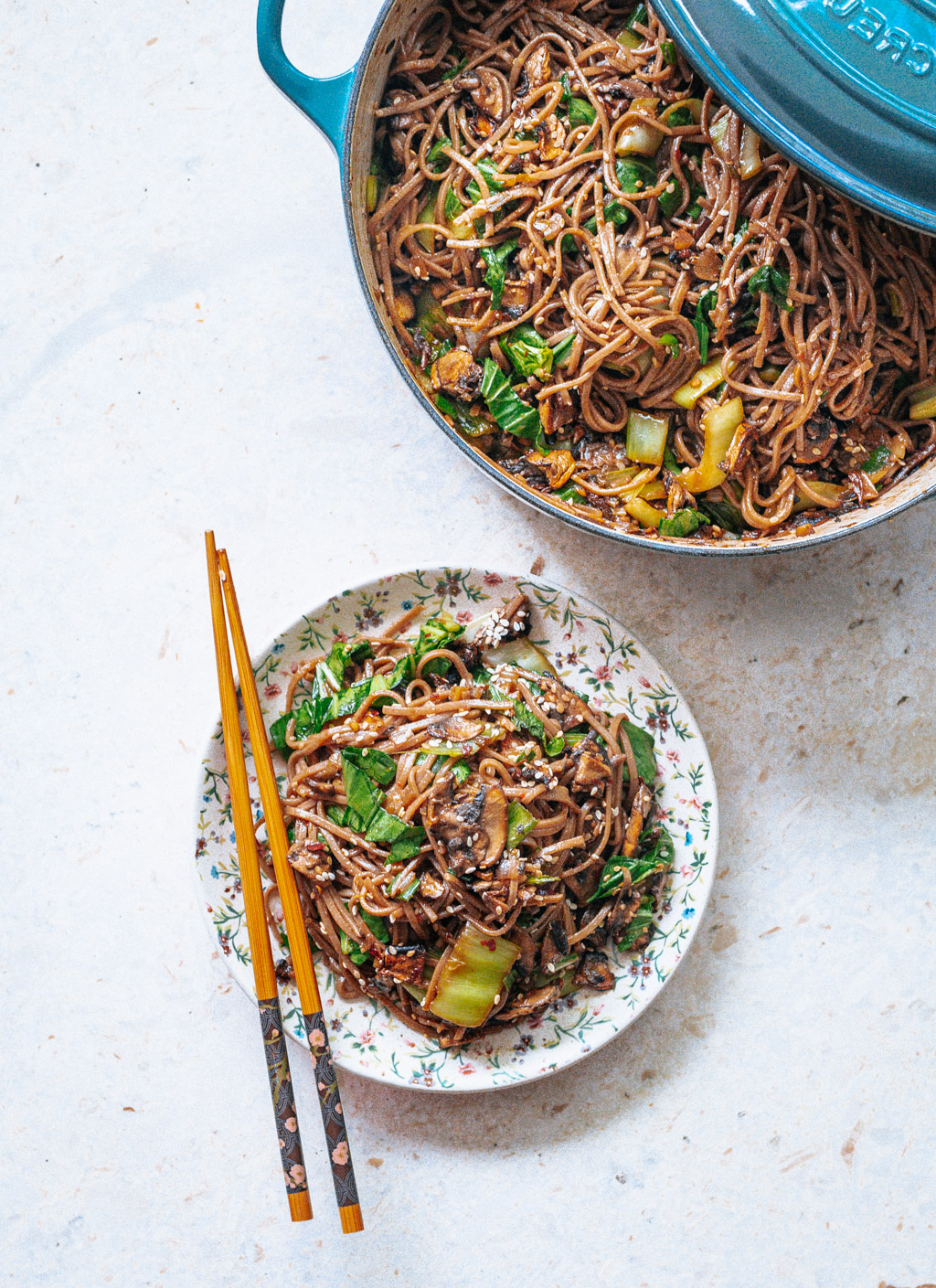 I used my homemade chilli oil here. The amount of chilli flakes in the recipe has been adjusted based on the addition of chilli oil. If you plan to use only chilli flakes, I would start with 3 teaspoons, taste the final dish, and add more if necessary.
TAGS: Asian,Mushrooms,Noodles