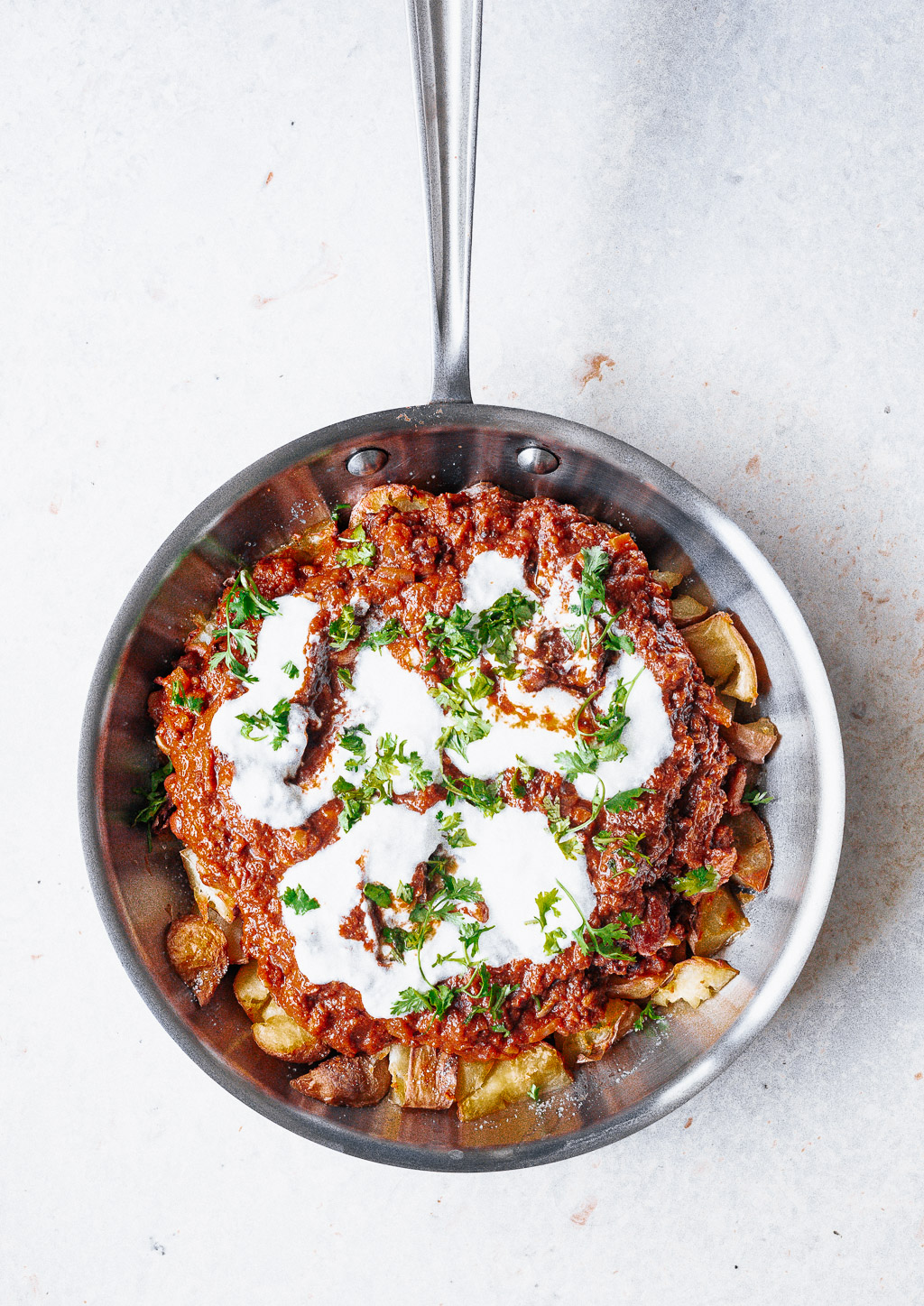 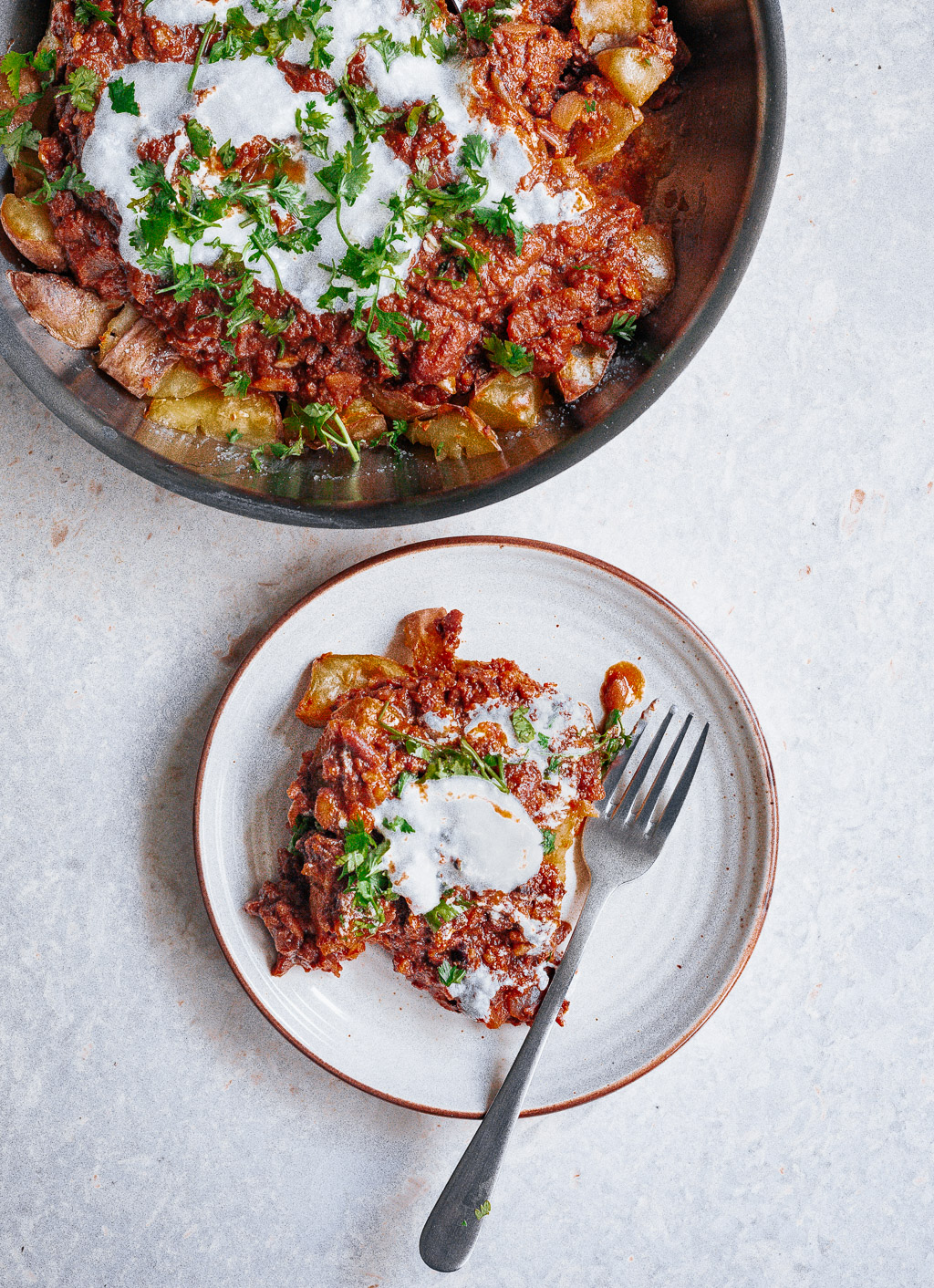 Okay so here’s the deal with this. I could eat beef chili for meals on end (and often do), so I’ve been on the lookout for a vegetarian-friendly version to make this dish work in our house. (Comparing a bean chili to a beef version does not add up in my head. This is clearly not an apples to apples comparison so I won’t go there. I’ll just say that this is a reworking of my beef chili – we’re going the way of the spices and beans, only, leaving out the beef and adding a whole lot more beans.) 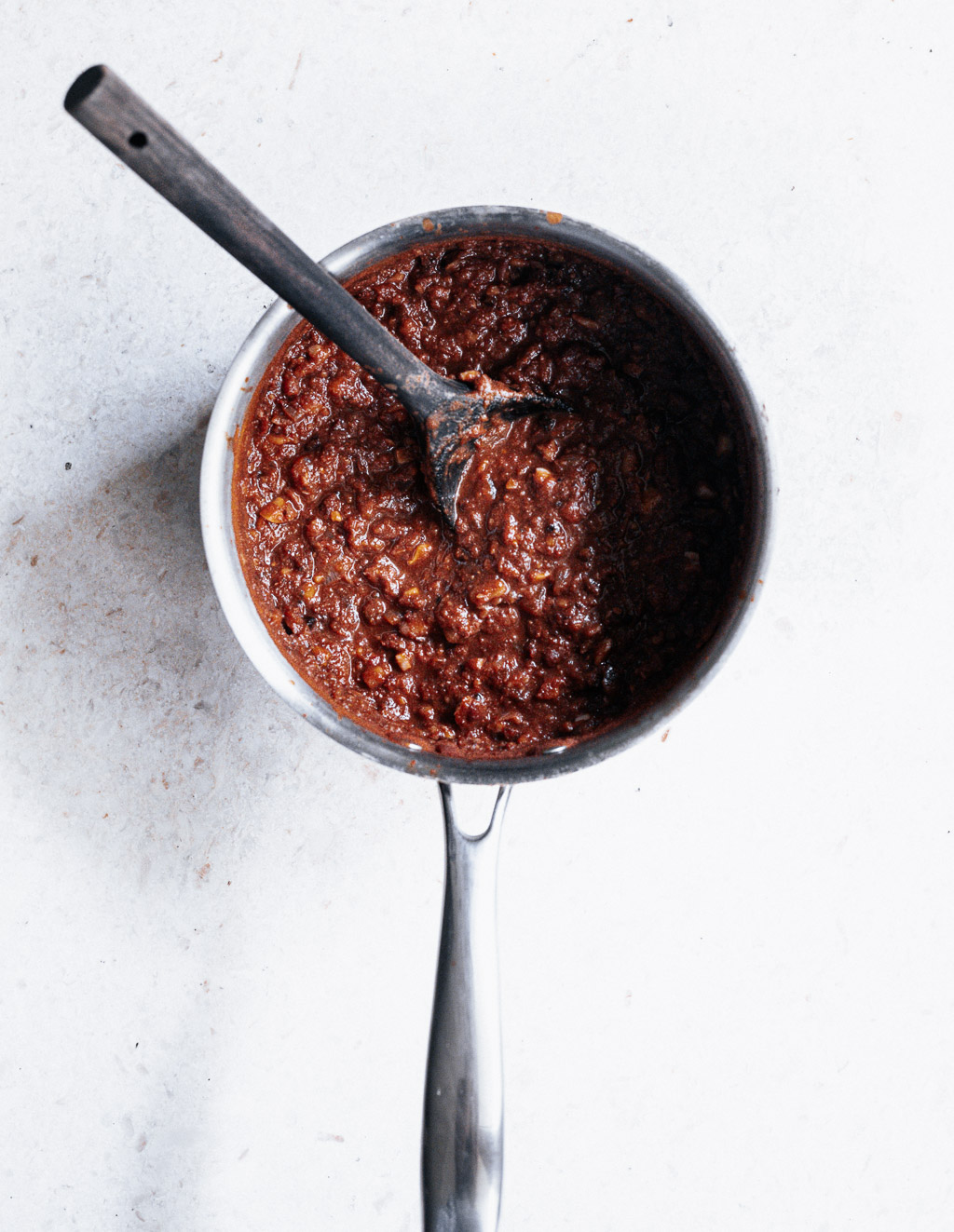 Adding beans to a veg chili is by no means a revelation. In fact it’s probably ‘trending’ right now along with a soya chunks variation. Beans really work in terms of flavour but here’s my grief with them: they don’t thicken the sauce in any way. They hold their shape and stay separate from the sauce that they cook with; beans don’t form the ‘body’ of the sauce the way beef does. So unless you add a lot more of the ground spices and possibly blend the onions (think rajma masala), the only other choice is to reduce the sauce. Like, really really reduce it down. Which poses other problems: you will have to use a whole load of tomatoes to get this quantity of chili (Spain’s ‘la tomatina’ amounts is mild hyperbole). This will also result in an overly sour reduction.

I didn’t want to ditch the beans altogether—soya chunks was my fallback and I wasn’t feeling that—so I went on a hunch. I blended them. A few blitzes in the blender gave me coarse nubbly bits that were perfect to thicken the sauce. And also if you’ve slightly under cooked the beans, this is your saving grace. 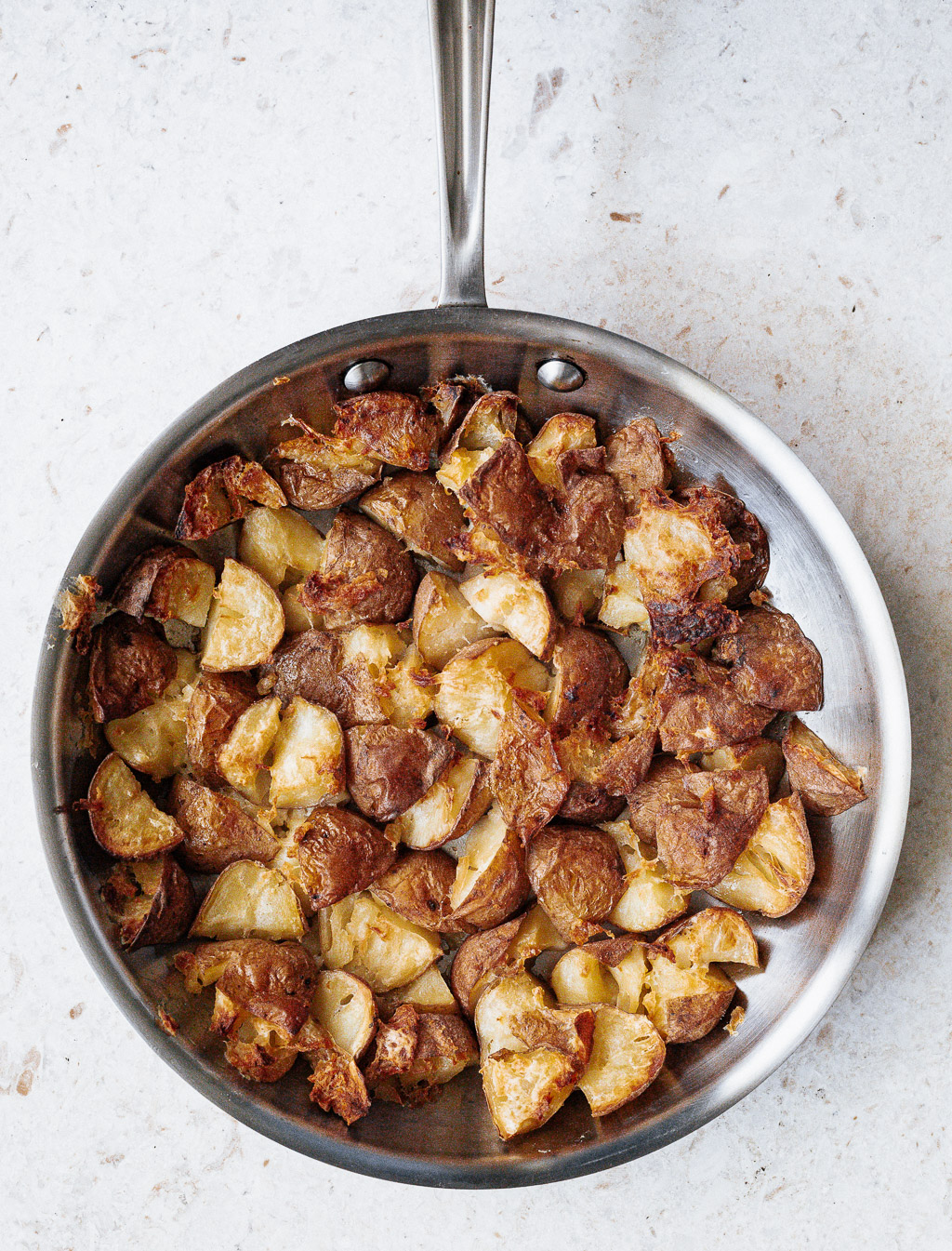 Since we’ve established that we’re veering from Chili in its traditional form, we’re going potatoes instead of rice. I took inspiration from those ‘smashed’ potatoes I’ve been seeing everywhere. My adaptation: first boiled until a knife goes through without any resistance. Then left to steam for a short while (makes their insides fluffy). Finally mashed down with the heel of the hand until they ‘splat’ onto the counter. The why: smashing increases the surface area of the potatoes. As it goes, more surface area equals more crispy bits as they bake. I made them the first time with halved baby potatoes but have since realized that they work just as well with regular spuds. Go ahead and use your hands if you’re into it, but I’ve found that taking a masher to it gets you the same results sans the time and effort. Contrary to popular belief, it’s impatience—not necessity—that’s the mother of all invention.

Garlic yogurt—yogurt mixed with garlic, nothing more complicated than that—adds an extra dimension here that offsets the heat and spice of the chili. I make this component of the dish first, and it sits in the fridge until everything else is done. The cool yogurt against the hot chili also gives you great temperature contrast here.

Chipotle peppers give the dish that distinctive smoky flavour. They come dried, as a concentrated paste, or in adobo – use in any form that you can find. If not, smoked or regular paprika. As an absolute last resort, chilli powder. 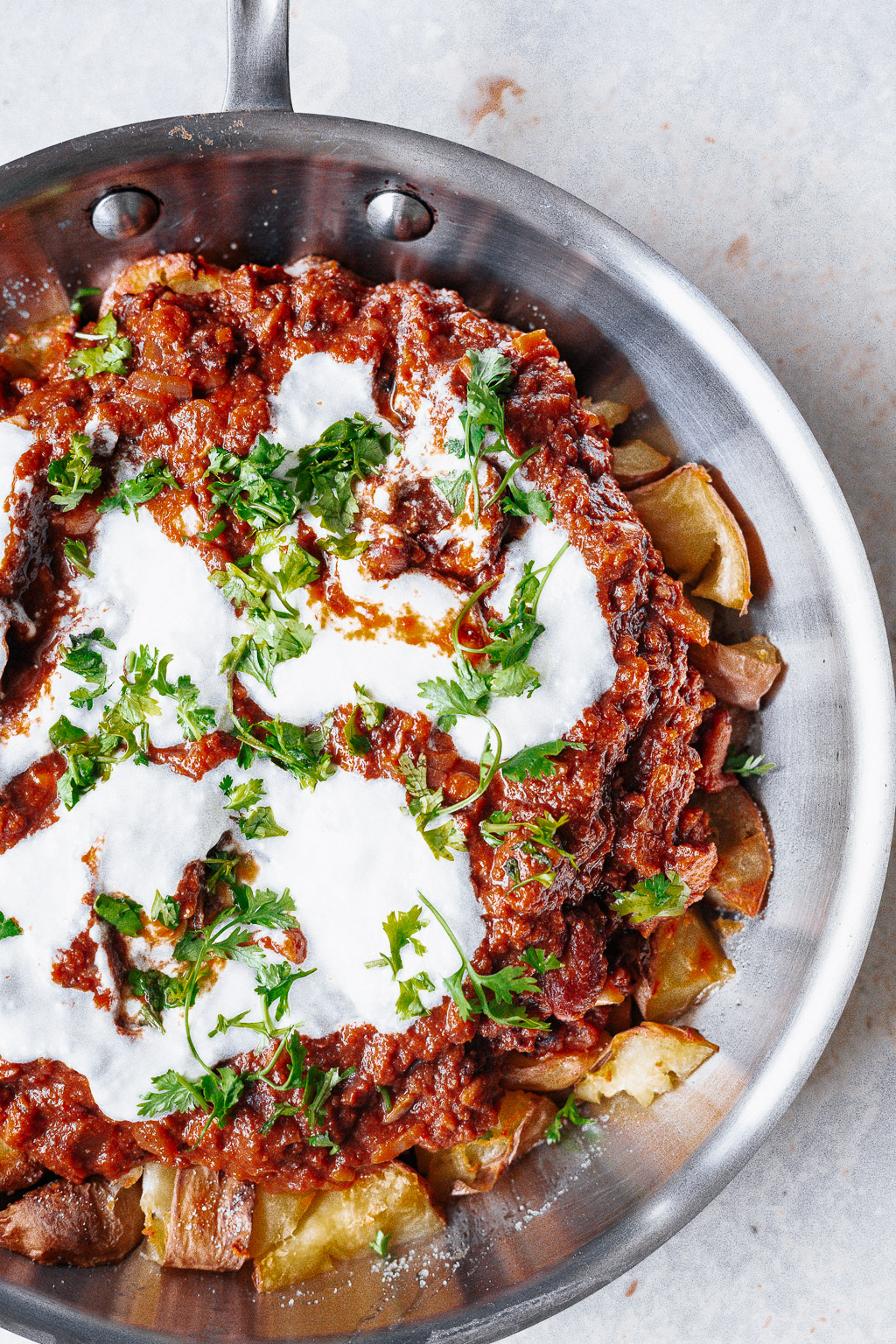 To assemble: top the potatoes with the bean chili. Spoon over the garlic yogurt and finish with chopped coriander. Serve with fried eggs.

Regular or baby potatoes - either works in this recipe. Chipotle peppers give the dish that distinctive smoky flavour. Use them dried, as a paste, or canned in adobo sauce - any form that you can find. If not, use smoked or regular paprika. As a last resort use chilli powder. If using dried kidney beans, soak them for at least 8 hours and then cook until tender. ½ cup dried beans roughly yields about 1 ½ cups cooked. Bean chili can be made up to 4 days in advance and refrigerated. After it's cooked, it can be frozen for up to a month.
TAGS: Mexican,potato

Flowers on the table - pretty! Squat jumps in the

Pasta with roasted beets & feta. 🍝 The only rea