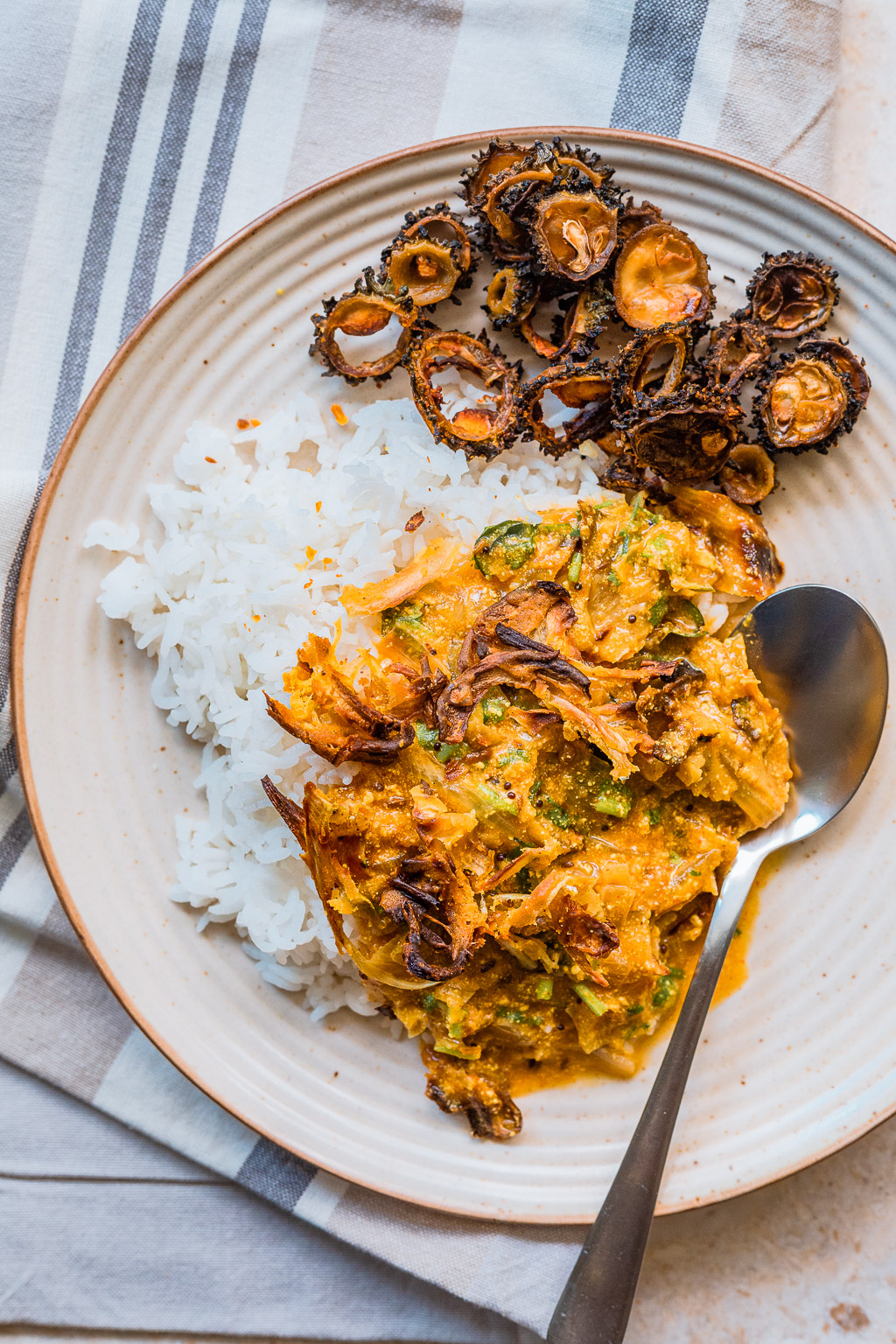 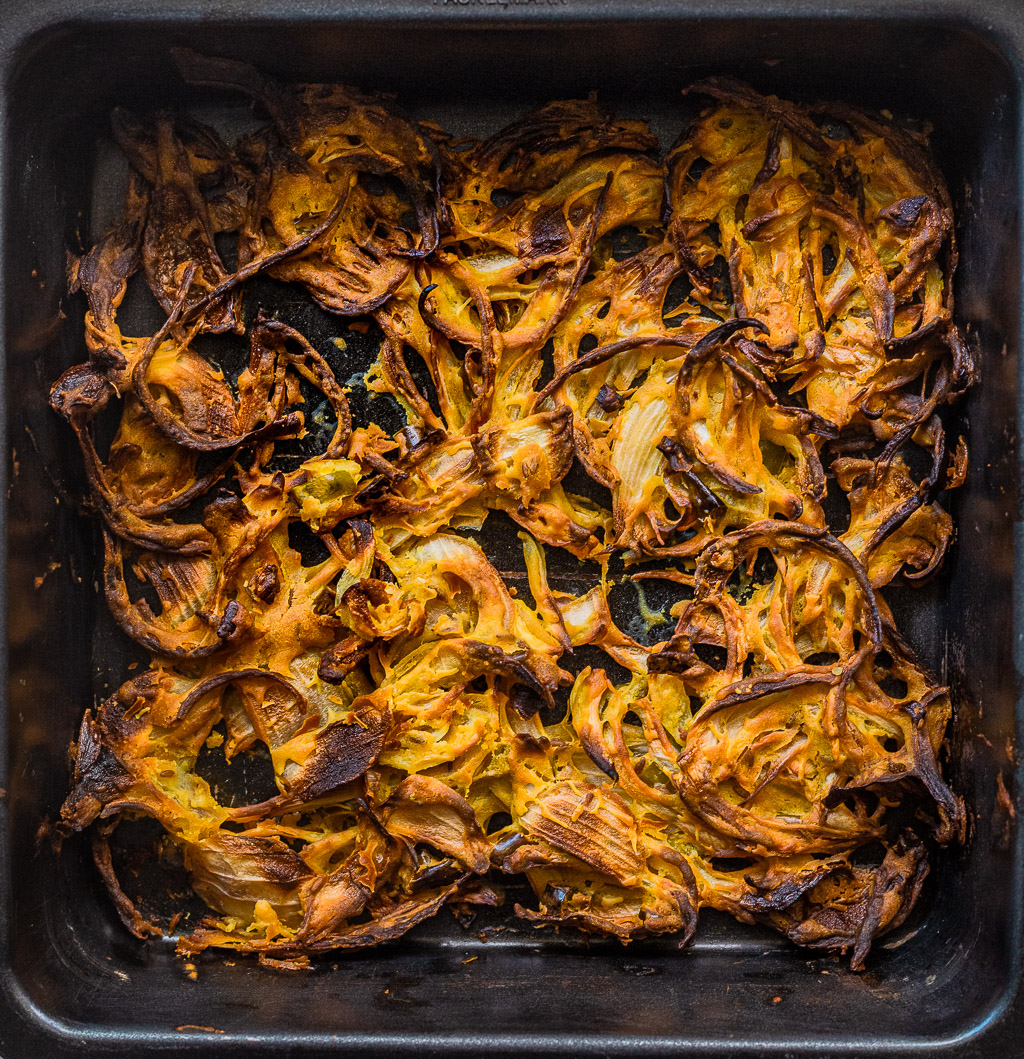 Any recipe that has the word ‘deconstructed’ in it conjures up images of broken tart shells and food that has been meticulously and painstakingly cooked and then taken apart, or that’s been cooked as separate elements and then put together. I get it, and I’ve even tasted some dishes made in this manner that were downright delicious. But generally speaking, it’s all too shi-shi for my taste. Just putting it out there that I’m not trying to replicate this methodology in any way, shape or form here. I figured that making them this way would mean less oil (you’d typically fry them) and also give me one less thing to stand around the stove for. As a firm believer in optimizing my time and energy in the kitchen, bunging things into the oven is my pro move. 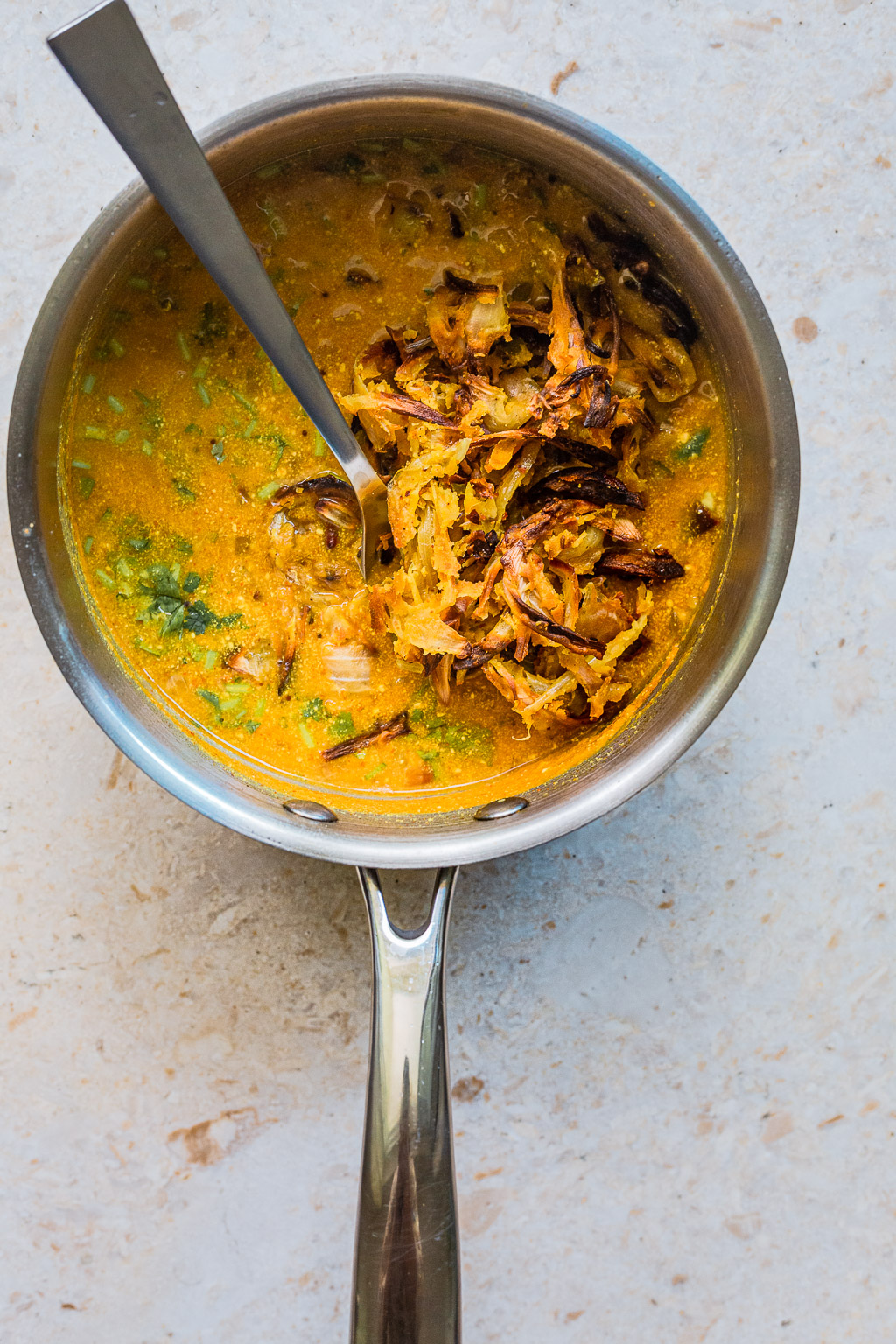 I had to think about this one – ‘deconstructed’ or ‘unconstructed’? Deconstructed would mean that they were first formed and then broken up; not what happens here. These are unconstructed in that you don’t even form the pakoras into their little mounds in the first place. The ‘pakoras’ here are basically just scraggly bits of onion coated with gram flour and spices and baked on a tray. Once baked until golden, they are cooled for a bit (don’t rush this part – when you take them out of the oven, still hot, they’ll look golden but also be a bit soggy to the touch. When they start to cool down is when they’ll crisp up). They are then broken up into uneven chunks and stirred into the kadhi. Which in my opinion is even better than a regular fried pakora because more crispy bits! And also more texture.

The ground spices that go into the kadhi mixture you’ll probably have around if you cook basic Indian food at home. The tempering uses whole spices: mustard, cumin, fenugreek and also asafoetida. If you don’t have access to these, use what you have and it’ll still taste great. The main flavour comes from the sourness of the yogurt and the ground spices anyway so you’re good. 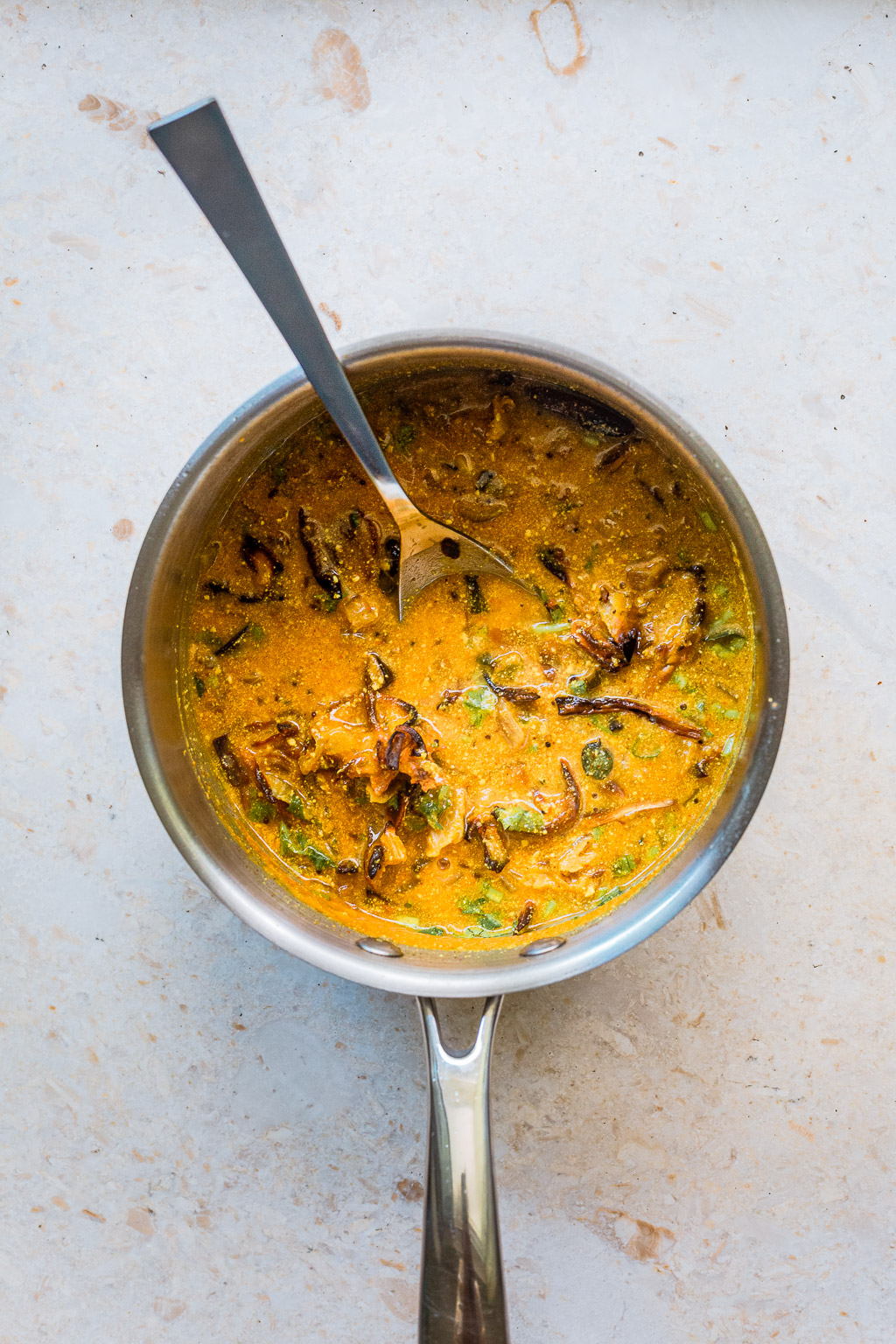 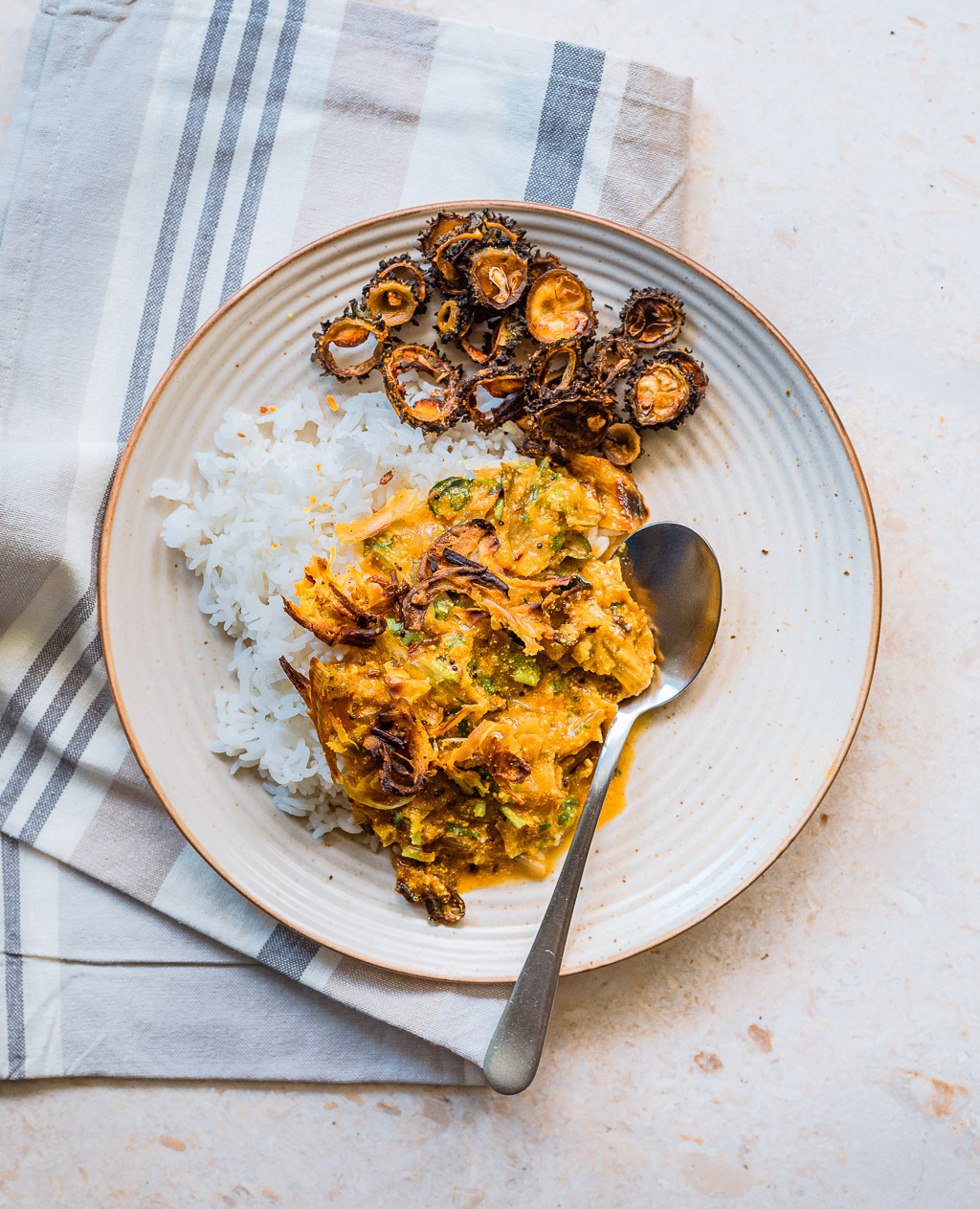 For the ‘unconstructed’ pakoras:

I used homemade yogurt for this recipe. Depending on how thick or how watery your yogurt is, you might need to add more or less water respectively.
TAGS: Indian,yogurt